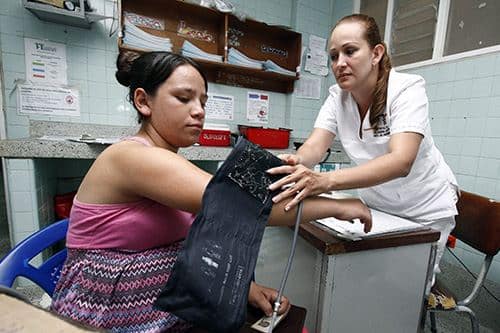 Tour agencies are claiming that the world emergency declared over the explosive Zika virus is having “no effect whatsoever” on Portuguese tourism to Brazil – despite Brazil witnessing an apparent epidemic of babies being born with “shrunken heads”, the result of microcephaly.

Reporting from Lisbon airport on Monday, RTP television news said that “despite Zika having propagated in large scale, Portuguese people are still choosing Brazil as a holiday destination”.

Whether this continues remains to be seen.

Certainly the rest of the world is dramatically rethinking holiday plans as different information services give increasingly worrying news of the virus – thought not simply to threaten pregnant women, but also pose the risk of Guillain-Barré syndrome, a nerve condition that can cause paralysis and leave victims on life support.

But the US centre for disease control has added Barbados, Bolivia, Costa Rica, the Dominican Republic, Ecuador, Haiti, Nicaragua and Curacao.

Meantime, in Portugal there have been six confirmed cases of Zika, nearly all of them detected in people who have recently returned from Brazil – none of them pregnant. One case is believed to have been contracted in Colombia.

Health chief Francisco George has insisted nonetheless that there is “no cause for any kind of alarm in Portugal”.

Hours later, professor Jeremy Farrar of the Wellcome Trust told Sky news presenter Adam Boulton in London that there have been “at least two cases where it has been proven that Zika was passed through sexual contact”.

Thus, it really is too soon to say Zika is simply a disease confined to the Americas, Pacific Islands and Africa.

The fact that the Aedes mosquito is thought to be the only one carrying the virus is also in question.

A television report, again by Sky last week, claims the virus has now passed Zika on to its more common cousins, “dramatically increasing the risk of it spreading worldwide”.

The scramble for a vaccine is another ‘unknown’. The UK’s Daily Mail suggested in a story last week that researchers in Canada may have a vaccine ready by October.

Elsewhere, reports suggest a vaccine may not be available for years.

In Portugal, the Zika travel alert on the government’s official website simply warns pregnant women to check with their doctor before they travel to any of the countries in the danger zone.

Cape Verde, however, is reported to be “upset” that it has been identified in the travel warning, as tourism minister Leonese Fortes claims the archipelago’s tourist islands “have practically not registered any case of Zika”.

Further inspection of this claim sees Lusa confirming that between September and December last year Cape Verde registered “around 4,200 suspected cases of Zika virus, principally on the islands of Santiago, Fogo and Maio”.

They are not the “main tourist islands”, but they are nonetheless islands visited by tourists.

Photo: Patient Sandra Milena Ovallos, 20 years old and 25 weeks pregnant, attends to a medical examination after suffering from fever and skin rash at the Hospital Universitário Erazmo Meoz in Cucuta, Colombia, on February 1. The number of pregnant women infected with the Zika virus in Colombia, who risk having babies born with microcephaly, has risen to 1,911, according to the National Institute of Health. While in Brazil so far, over 4,000 babies have been born with abnormally “shrunken heads” and severe brain damage.