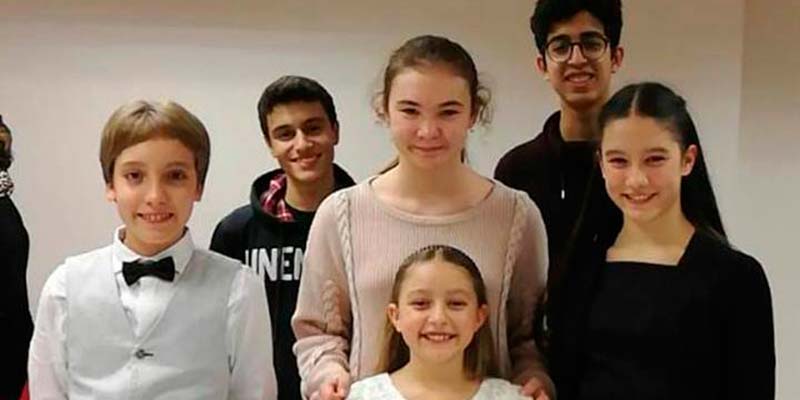 The final event in the Algarve History Association (AHA) 2018-2019 concert season is special. In October 2018, young Italian students came from Milan to the Algarve to perform at the Regional Conservatory in Faro. Friendships were formed and our Portuguese students were invited to Milan to perform in two concerts, and their delightful Italian hosts took the trouble to introduce them to the sights of the city. From this relationship, the Algarve representatives Nuno Martins (images) and Professor Oxana Anikeeva (piano) developed the project Viagem Na Minha Terra, clearly a reference to the great work of Almeida Garrett. The aim of this project is to promote Portuguese music and to use multimedia images from Portugal. An exchange protocol was signed between AMICA (Associazione Musicisti e Interpreti Cassanesi) of Milan and CRAMC (Conservatório Regional do Algarve Maria Campina) of Faro. The President of AMICA, Dr Cernushi, together with parent Gianluca Zoni, organised the music, the visit to Milan and the sightseeing tours. Dr Cernushi also included an invitation to the Algarve students to perform two concerts (the Viagem Na Minha Terra project and another different programme) at the Milan Piano City festival, when Milan becomes one big concert hall dedicated to the piano.

Born in Milan in November 2006, Beatrice Baldissin has won many competition first prizes, the most impressive of which was that at the 12th Jan Langosz Music Competition in 2018 at Bardolino, where she was awarded a perfect score of 100 out of 100. She has performed several times at the Open Piano Festival Libreria Feltrinellin in Milan, and this year won first prize at the Città di Tradate Music Competition.

Younger sister Anita Baldissin was born in Milan in November 2009, and began her studies on the violin at age six. Only a year later, she was admitted (with the highest score) to the Giuseppe Verdi Conservatory where she is still studying. Even at such a young age, she has performed already in Cremona, Milan and Faro.

Representing CRAMC, Tiago Jesus began his piano studies at age twelve with Irene Ainstein at the Academia de Música de Tavira. In September 2017, he moved to CRAMC, and in that year, he received an honourable distinction in the Anatólio Falé Competition. The next year he won the first prize in the Sebastião Leiria Competition, and after taking the first prize at the 2018 CRAMC competition, he attended the Summer Piano Academy and Festival at Imola in Italy, where he had the opportunity to participate in the competition Prémio Città di Imola. At Imola, he also attended several master classes given by Marlies van Gent. He followed in October 2018 with first prize in the 3rd International Competition for Arts in Turkey. In March 2019 he participated in a master class with Álvaro Teixeira Lopes and attended two more master classes with Constantin Sandu. Recently, he participated at the 2018 Milan Piano City, where he participated in the two concerts to promote Portuguese music.

Thirteen year old Angelika Ryzhak studies with Professor Oxana Anikeeva at CRAMC. She won Category C in the 4th Sebastião Leiria Piano Competition held in Tavira in 2018. She also participated in the Summer Piano Academy and Festival Competition at Imola in 2018. She was the winner in her age category at the 3rd International Competition for Arts in Turkey 2018. Angelika has attended masterclasses with Marlies van Gent (Holland) and Maria Nemtsova (Russia), and alongside Yannis Stamoulis, another CRAMC student, participated in the two Portuguese-Italian concerts in November 2018 in Milan.

Seventeen year old Miguel Jesus started playing the saxophone only three years ago with the Banda Musical de Tavira, since when music has become his passion. In September 2017, he began his studies at CRAMC, gaining excellent results. He has participated in masterclasses with saxophone virtuoso Vitaly Vatulya, at the Escola de Artes da Universidade de Évora and he later also travelled to the Netherlands to work with Arno Bornkamp.

AHA offers thanks to Nuno Martins for the image below, and to Dr Cernuschi for the support of AMICA in this concert.

The Young People’s Concert will be held at Quintinha da Música on Sunday, July 7 at 5pm. Entrance to the concert is free, and AHA asks for voluntary donations only, which will form part of the donation made by AHA to be presented to the management of CRAMC on that afternoon.

Reservations should be made by email: lynne.algarvehistory@gmail.com

Photo: In front: Anita Baldissin; second row (left to right): Maxim Francesco Zoni, Angelica Ryzhak and Beatrice Baldissin; at the back from left to right: Miguel Jesus and Tiago Jesus.