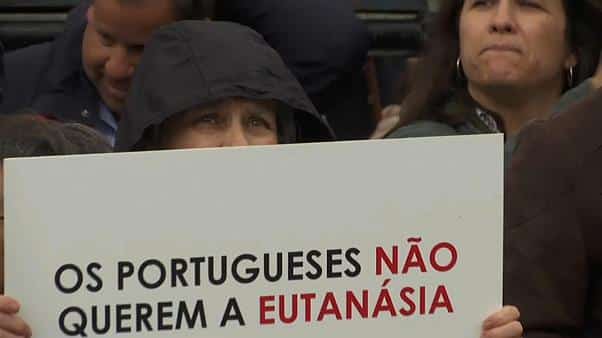 All five bills presented in parliament today paving the way towards Portugal decriminalising euthanasia have been approved – much to the angst of protestors demonstrating outside, and flying in the face of a petition, backed by the Catholic Church, which has already amassed over 40,000 signatures.

With MPs congratulating themselves on having taken ‘the first historic step’, the truth is there is still a long way to go before euthanasia, or indeed physician-assisted suicide, will be allowed in Portugal.

Next up must come ‘discussions in speciality’, in which all parties will seek to find a text that they feel ‘ticks all the boxes’.

There will also be scrutiny by, and input from, the commission for Constitutional Affairs, Rights, Liberties and Guarantees before a final vote in parliament, which PS leaders hope to see at some point in the summer.

The proposed law would then have to be rubber-stamped by the President of the Republic Marcelo Rebelo de Sousa, himself a devout Roman Catholic.

Said SIC television this evening, the next weeks and months will give time to pro-life and anti-euthanasia movements to collect the 60,000 signatures required for the right to a national referendum – a process MPs have intimated they would like to avoid.

Euthanasia – the practice of a doctor directly administering fatal drugs to a terminally-ill patient – is legal in Belgium, Canada, Colombia, Luxembourg, the Netherlands and Switzerland.

Some U.S. States permit medically-assisted suicide – where patients administer the lethal drugs themselves under medical supervision.

Writing from the parliamentary building, Barry Hatton for Associated Press described how each MP was called to vote in alphabetical order after nearly three hours of debate.

The process ‘underlined the historical weight of the moment’, he said.

“Such a lengthy method is usually used only for landmark votes, such as a declaration of war or impeachment”.

In this case, pundits have said it is possible that President Marcelo will veto the law. But even if he did, he could not block a second vote by MPs as he doesn’t have ‘executive powers’.

This is the second parliamentary vote on euthanasia. In 2018, four bills presented by PS Socialists, Bloco de Esquerda, PAN and PEV (the Greens) were defeated.

Explain reports, all today’s bills, from the same four plus a fifth from the new Iniciativa Liberal, are similar in content. There is a proviso in all the texts that patients must either be Portuguese citizens, or legal residents, to discourage others from traveling to Portugal to end their lives.