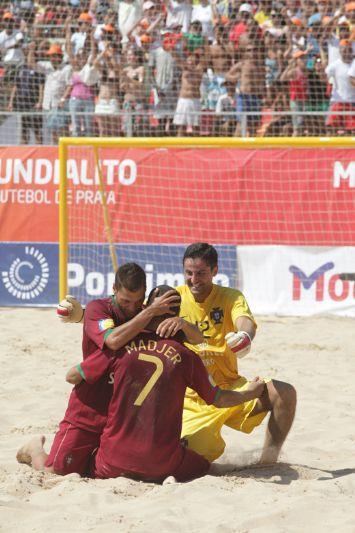 This weekend sees the 14th Beach Football Mini-World Cup in Praia da Rocha, the Algarve resort plays host to the event for the fourth consecutive year.

National coach José Miguel has had his players in training locally for the past few days in preparation of their title defence which begins today (Friday) at 3pm against the United Arab Emirates.

Further matches follow at the same time against Spain on Saturday and Brazil, who were defeated in the decider last year, on Sunday afternoon.

The tournament, which will receive live television coverage from TVI, will be accompanied by a number of side shows and entertainment for spectators while entry is free.

Beach football will return to the Algarve and Vila Real de Santo António in particular between August 27 and 29 for the European League Super Final for which Portugal must be favourites following recent victories over Norway and Switzerland, which allowed Madjer and company to pip the Eric Cantona-trained French in the final standings.