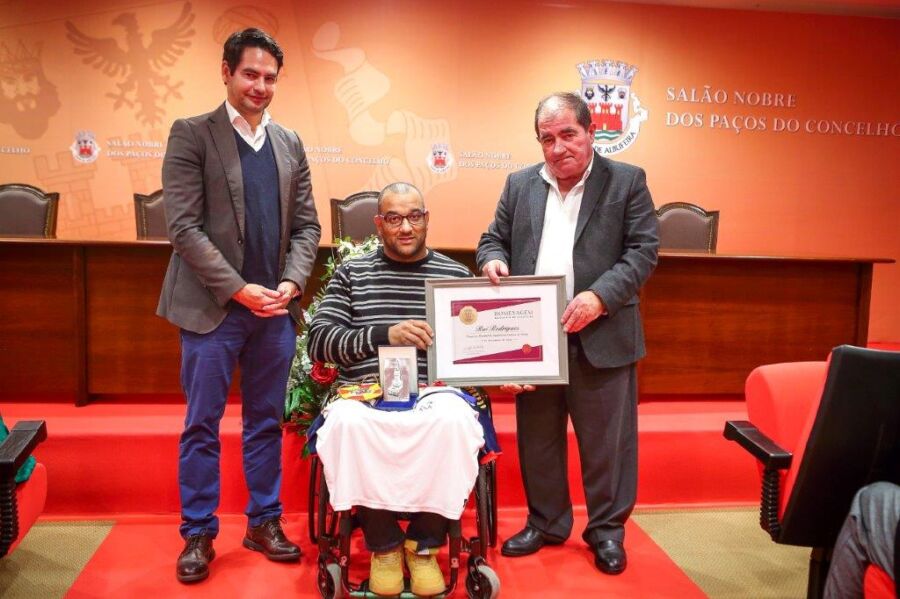 Albufeira Council hosted on December 16 an event in honour of Rui Rodrigues, a local athlete who was part of the Portuguese national team which won the first World and European Wheelchair Handball Championship in November.

Family members, friends and handball partners were in attendance in what was described as a “symbolic but very warm ceremony”.

As Albufeira Mayor José Carlos Rolo said, “it is not every day that we have a world champion in our borough.”

This was the second time that Rui Rodrigues was honoured in Albufeira, which according to the mayor “is proof of the quality of Rui and his team.”

Rolo also said that while Albufeira is a municipality that is “without a doubt concerned about inclusion and the participation of everyone in various day-to-day activities, there is still much to be done.”

However, he guaranteed that “there are already projects underway to move forward with these changes.”

Rolo added that the municipality has started supporting this sport, as there are two athletes from Albufeira who are playing for Casa do Povo de Messines.

Deputy Mayor Cristiano Cabrita also thanked Rui Rodrigues for promoting the municipality’s name outside of Portugal and declared the borough’s “unequivocal support” to the athlete.

He also said the municipality has applied to host the World and European Wheelchair Handball Championship so that it can be held in Albufeira in the future, “with Rui as our big star.”

Rui Rodrigues also spoke during the ceremony, stressing that he never gave up on his love of sports.

“Even after I became paraplegic in 2001, I continued fighting for my sports career,” he said, adding that his next goal is to compete at the Paralympic Games.

“Wheelchair handball is not yet part of the list of sports at the biggest competition in the world for handicapped athletes, but we are trying to change that. If it happens, then my goal will be to participate in the 2028 Paralympics in Los Angeles,” the athlete vowed.

Last month, Lagoa Council also paid tribute to Tiago Cantigas, another Algarve athlete who was part of the historic team.