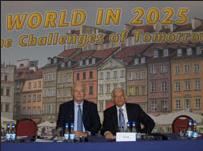 Five years ago, a UK MEP colleague conceived the idea of an annual two-day conference to be called the European Ideas Network (EIN).

Its purpose was to generate practical ideas that would move the European political agenda towards a more competitive and less bureaucratic EU, and to press for changes in policy to deliver it. The few politicians invited would be there largely to listen; the agenda would be led by some 250 academics, ambassadors, company chairmen, journalists, think-tankers and opinion-formers from as many as 30 different countries across the world, including India, Japan and the US.

The first such conference was held at Oxford University in 2002 and was a triumph. Since then, the EIN has been successfully held in different countries each September and has become the main magnet worldwide for serious work on EU Centre-Right policies.

I have been fortunate to have been one of the few MEPs to have been invited each time and at this year’s conference in Warsaw, it was an extra privilege to be the only MEP from any country to both serve as a panellist on one of the 12 Working Groups and also to act as Chairman on another.

An indication of the esteem in which the EIN is now held was the eminence of the keynote speakers at the two working dinners. At the first were two former Prime Ministers: Jose Maria Aznar from Spain and Jerzy Buzek from Poland. At the second, we heard from the father of the Solidarity movement in Poland, Nobel Prize-winner, Lech Walesa, and former World Chess Champion and now leader of the democratic opposition in Russia, Garry Kasparov. It was an honour not just to listen to them, but to meet and converse with them personally afterwards.

The most memorable moment was when Lech Walesa was introduced by German MEP, Elmar Brok. Conscious that it was the Nazis that had razed Warsaw to the ground, and then left it to the Russians, he was genuinely close to tears as he announced that this occasion was the most important day of his life. There was much embracing between Poles and Germans at the end.

The overall event was a vivid reminder that, although we all came from different cultures and political heritages, we had certain vital things in common. We share the values of democracy, freedom, human rights and quality of life.

We realise these values do not just happen automatically, but have to be worked at and fought for. We recognise that for these values to be sustained, we have to work at them together and fight for them together. The conference was not just a melting-pot of ideas: it was also an inspiration.