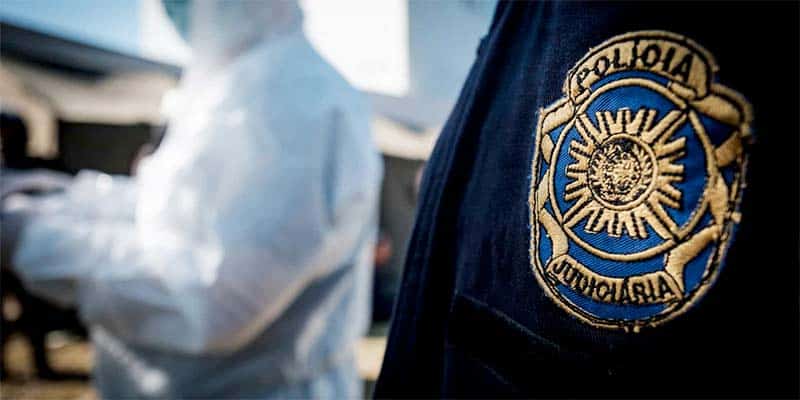 The body of a woman “aged around 30” has been discovered with multiple stab-wounds in a suitcase left on the pavement in a residential neighbourhood close to Lisbon.

Say reports, locals remember seeing a man “sitting on top of the suitcase” and “dragging it” behind him shortly before police were called.

For now, there are no details on the identity of the dead woman, nor any description of the man (see update below).

A resident called authorities after noticing the suitcase, which had been wrapped in plastic, “abandoned and broken”.

It was “very heavy”, he told reporters, and he felt something was wrong.

GNR agents arrived to open the case, and it was then its grisly contents, wrapped in a sheet, became obvious.

Says tabloid Correio da Manhã, the body – ‘intact’ and “folded to fit into the case” – showed various stab wounds to the back.

Discovered around 2pm on Wednesday, the understanding is that the woman’s death will only have occurred “shortly before the suitcase was discovered”.

Said a police source, the crime was so recent that possibly family, friends and any work colleagues would not have had the time to file a missing person’s report.

Certainly there were no reports of anyone missing in the area by yesterday afternoon.

“The condition of the body isn’t compatible with a long journey”, added the source, suggesting the victim may well have lived locally.

As investigations continue, a local man has told CM that on Tuesday night he noticed “two men with a torch looking for something” in the street where the suitcase was found. He said he thought it was strange, but that there was no suitcase present at the time.

A second man – the one who called the incident in – said he discovered the case on his way back from a walk, and that when he started out, “there was nothing there”.

Socialist candidate for Arruda dos Vinhos André Santos Rijo has recently posted over social media: “I have just received news from the competent authorities that at 2am this morning they arrested the man suspected of this crime, confirming that it was yet another case of domestic violence ending in the worst possible way”.

“A young Brazilian couple recently arrived”, he added. “They had been living in Arruda for around two weeks, on the S. Lazaro urbanization (where the suitcase was left): she worked in a restaurant, he in civil construction. The neighbours had not noted any signs of aggression or violence between the two. They were not known to authorities as they had only just arrived…”

Rijo went on to lament the scourge of domestic violence which he said “has multiplied throughout the country”, stressing this has been ‘a particularly bad year’.

It’s up to communities now to “reinforce” support for these situations and “be more aware of the reality around us”.

The old adage that what goes on between husband and wife being no one else’s business no longer washes, Rijo stressed. “These problems need a national response”.