The hot summer months are now well behind us, the yearly migration of birds has finished, and the cooler days and colder nights are here. Our migratory summer visitors will now be enjoying the warmer climate of Africa and, whilst we prepare our heating for the winter months, there are birds that have arrived here in the Algarve to take advantage of the relative warmer climate from their northern breeding grounds, including three fantastic birds of prey that, although not commonly seen, can be found around the Algarve region.

The red kites are a delight to watch as they gracefully glide through the skies scavenging for food on the ground. These fairly large raptors with a wingspan of 180cm are more in abundance on the Alentejo plains during the winter, arriving from their breeding grounds in the northern regions of Portugal.

However, they can also be spotted in the Algarve region during the wintertime but are far less common than the numbers seen on the Alentejo plains. Identification is easy – look for the distinctive forked tail which twists to steer whilst it majestically soars with their long wings stretched out.

As you can imagine, the plumage consists of reddish-brown feathers with contrasting dark streaks. Both sexes are similar, with the female generally being slightly larger as is common with most birds of prey. Their food source is carrion, although they will prey on small mammals, even reptiles and large insects. They can appear anywhere but more likely in the flatter areas of the Algarve region.

The osprey or, to be precise, the western osprey is another large bird of prey that can be found in the Algarve during the winter, arriving from northern parts of Europe. They are fish eaters and watching them swoop and pluck a large fish from the water with their adapted talons is a fantastic sight.

They will over-winter anywhere there is a large water source with plenty of fish. They can be spotted at any of the large ‘barragens’ (dams) and coastal wetlands such as Ludo, Quinta do Lago and Salgados.

Being a large bird of prey (180cm wingspan), you would think it was easy to spot, however, they fly with their wings arched and drooped at the ends, blending very well with gulls who fly in a similar fashion. I spent a long time photographing a pair at Ludo and a passer-by stopped to ask why I was so interested in the same two “seagulls”. Once I explained, we soon had an audience gathered to watch them diving for fish.

Although nocturnal, short-eared owls can be witnessed hunting during the daytime, particularly at sunrise or just before sunset. This, of course, is a photographer’s dream coinciding with the “golden hour”, a time where the sunlight is perfect for photography.

They are not common in the Algarve but can be found in open, flat grassland, where it hunts low over the ground searching for voles and other similar sized mammals.

Their wingspan can be up to 110cm and a body length in the region of 40cm. Their “short-ears” are actually small tufts on the top of their head, which are often not visible but can be raised as a defensive stance. Their black eye rings (which helps concentrate their vision) surrounding their bright yellow irises can often give the appearance of their eyes being illuminated.

During their winter stay, they rarely make a sound, so listening for a call will not help. They can be totally accepting of humans and usually seem undeterred by people watching. Many years ago, I spent a lot of time photographing them in a small patch of land frequented by dog walkers and they did not seem bothered by dogs running free in their hunting grounds. However, this of course, is not an invite to try and approach them.

Most coastal wetlands provide the perfect habitat due to the surrounding flat grasslands. I have also spotted one on the dry flood plain at the top end of the Barragem de Odelouca in the Algarve Serra. However, this was possibly a stop-off during migration. 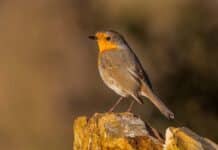