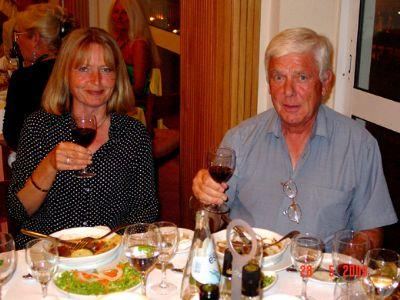 A total of 60 members of the Algarve Wine Society tasted the Ribatejo wines of Fiuza & Bright during their latest event at the EVA hotel in Faro on May 28.

The winery’s manager, Giovanni Nigra, presented three whites, including a Sauvignon, a rosé and five red wines, including a Merlot, a Cabernet Sauvignon and Ikon, which is only produced for export.

The society’s programme for the first half of 2009 will end on Sunday, June 28, with its third annual golf outing, at Quinta da Cima, followed by the traditional summer party, at the Tavira Pousada.

The society’s activities will then resume in September with a day trip to the Herdade da Mingorra winery in the Alentejo on Wednesday, September 16, and a four day trip to Toledo and La Mancha in Spain from September 29 until October 2.

There will also be a tasting of Quinta de la Rosa’s Douro wines, followed by dinner, on October 21.

Membership in the Algarve Wine Society is currently at its upper limit and there is a waiting list for entry, but if you would like further information about the organisation please contact the secretary, Larry Hampton, by email at hampton@mail.telepac.pt.