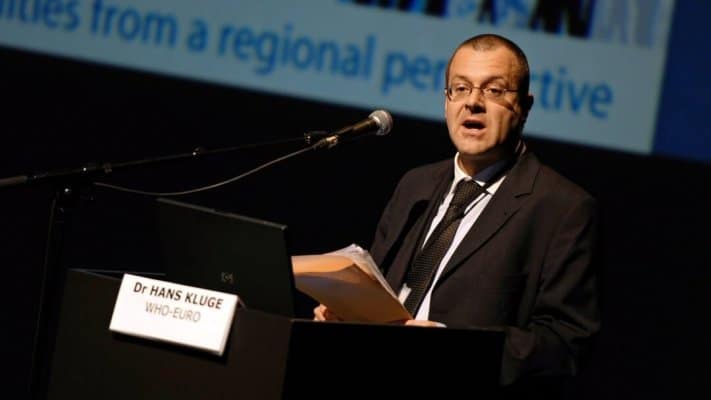 The European arm of the World Health Organisation (WHO) has admitted it is “pessimistic over the capacity of the (current vaccines) to halt the Covid-19 pandemic”.

In a press conference today, WHO Europe’s director Hans Kluge said variants of the SARS-CoV-2 virus have reduced the perspective of attaining herd immunity, and there is much more probability that the illness will become endemic, rather than eradicated.

This is a premise that has been widely trailed in recent months (click here)– with specialists in Portugal quite some time ago pointing to the virus already being endemic in Portugal.

But Mr Kluge had been sticking to his guns up till now: in May he still insisted the pandemic could be halted with a global vaccine coverage of 70% (though this is a long way from being attained).

Thus now the vaccine is simply being ‘presented’ as a way in which people can avoid serious illness and death.

It remains a virus from which over 98% of people infected will make a full recovery (though this percentage increases as people’s ages advance).

Again, only a tiny percentage of people infected with SARS-CoV-2 require hospital treatment.

Said Mr Kluge: “I think  the essential objective of vaccination will be more than anything else to impede serious forms of illness and death”.

Vaccination at a high level will still be required, he stressed, but if one accepts that the virus will continue to have mutations (which certainly seems to be the case), then it is clear it is here to stay “like the flu”, and that countries will have to progressively adapt their vaccination strategies against endemic transmission – and “come to essential knowledge on the impact of supplementary doses”.

One of the ‘indispensable’ reasons for a high level of vaccination will be to “reduce pressure on health systems that desperately need to treat other illnesses beyond Covid-19”, he said.

Coincidentally Mr Kluge gave his press conference on a day that SIC television news reported that patients have been stacked up in ambulances waiting for more than six hours to be admitted to hospital in Vila Franca da Xira (Lisbon outskirts) for the last few days.

The situation is compromising response to other potential patients – and no-one appears to understand why it is happening.

It is an “atypical affluence for this time of year” explains SIC.

In the first eight days of September, for example, the hospital’s ambulance crew had to respond to around 1,000 more calls than during the same period last year”.

The kind of cases coming in have also shown “significant increase in clinical complexity” (meaning people are more sick than usual), seeing a 50% increase in yellow triage bracelets (classed as ‘urgent’), and 76% increase in orange (‘very urgent’).

This situation is exactly what doctors warned would happen many months ago, when they called on the government to implement “a real recovery of the Portuguese health service, or face catastrophe” (click here).