Portugal Resident
Home Society Contributors Who does what in a major fire? – Part 1 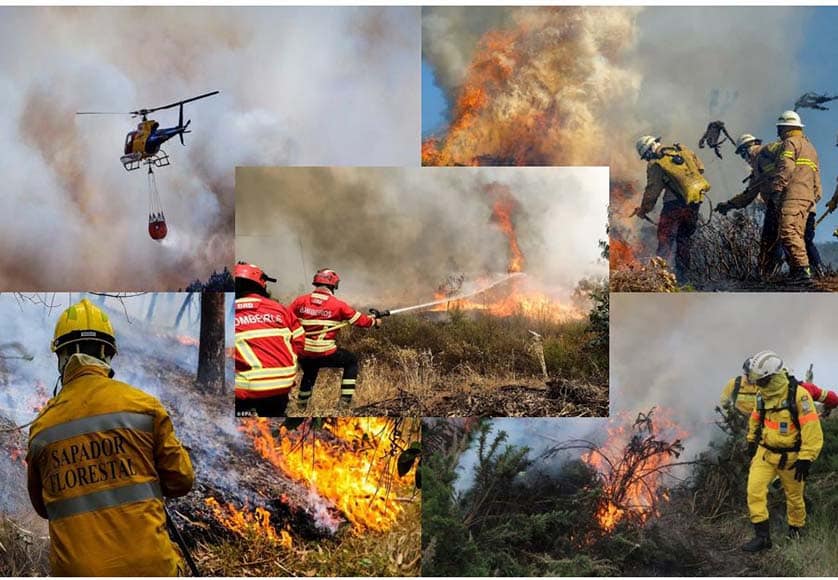 The purpose of this two-part feature is to outline the work undertaken by various entities (known as civil protection agents) during rural fires.

It is quite a complex structure, within the overall framework of the annual DECIR (National Operational Directive to Combat Rural Fires) and although each entity has clearly defined roles, when there are emergencies, those deployed work as a team, hand in hand, taking every action required, with the overall aim of preserving life and property.

There are many entities that can be deployed in large fires, including the Bombeiros, GNR, PSP, UEPS, Special Civil Protection Force, INEM and Red Cross, Forest Sappers, Civil Protection Command Units, ICNF and others. Depending on the nature of the fire and its complexity, the level of resources actually deployed will be determined.

Firefighting has evolved a great deal since the fires of 2017, and the success in fighting fires relies on extensive and thorough preparation and planning, the increasing use of technology, the rapid deployment of resources, strengthened air attack, sound and experienced leadership, considerable teamwork, not to mention the bravery of all the firefighters and support staff involved.

The operational command of rural fires is performed in different stages depending on the fire’s complexity. When a fire is detected and the alarm is given, the District Operational Coordination Centre (CDOS) launches the initial attack by at least one helicopter and its heliport team/brigade (subject to availability). At the same time, three firefighting teams for the nearby towns are launched.

This initial attack must reach the fire within 20 minutes after alarm is given. In some parishes considered priority, two aerial means are launched in the initial attack. Initial deployments of aircraft may not always be possible when there are multiple fires in the same area.

When a fire develops to a stage where it becomes more complex and/or additional resources from further afield are required, the command can be elevated at either district, regional or national levels – there are six levels.

After the second level (when deployment reaches some 300), there is usually a command post on the ground and the overall commander will work with teams that support him/her in the decision-making process and in the coordination of various Civil Protection agents (those mentioned earlier), to manage directly and monitor the implementation of the operation, seeking their advice and support in specific functions.

There are 465 fire brigades/departments in Portugal comprising 29,457 Bombeiros of whom 18,285 (62%) are volunteers and 11,172 (38%) are professionals (source: ANEPC). Their responsibilities include: fire prevention and fighting; assistance to populations in the event of fires, floods, landslides and, in general, all accidents; underwater searches and rescue and transport of injured and sick people, including pre-hospital emergencies and many others. A firefighter is an individual who, professionally or voluntarily, is part of a fire department, whose activity is to fulfil these missions.

Volunteers and professionals work seamlessly, have a high “esprit de corps” and are the cornerstone of firefighting in Portugal. The number of volunteers has been declining and full-time professional firefighters are increasing.

The recent increase in professional firefighters is mainly, but not exclusively, in the form of Permanent Intervention Teams (EIPs). These were created in 2017 to consolidate the commitment to strengthen the permanent professional response to civil protection risks. With recent increases, 734 EIPs have been authorised with more than 3,600 operational personnel.

Within municipalities, initial deployments to fires are usually in the form of EIPs, but as a fire develops, additional Bombeiros are deployed as required and other entities deployed depending on the complexity of the fire.

Comprising over 1,000 soldiers, the Emergency Protection and Relief Unit (UEPS, previously GIPS) carry out helicopter operations in fighting rural fires. A team consists of five, eight or 12 personnel, equipped with forest sapper resources for direct intervention in the theatre of operations. It is through this team that ground-to-air connections are established, i.e., between the Fire Rescue Operations Commander (COS) and the pilot in command of the aerial support.

UEPS also fight fires on land, through Protection and Rescue Intervention Teams of four personnel, using light forest firefighting vehicles (VLCI). In addition to the vehicle, which holds about 500 litres of water, this team is also equipped with firefighting equipment for direct and indirect firefighting. These land intervention teams are generally engaged in first actions in emerging fires, in support of the helicopter team.

Their responsibilities are diverse including evacuations of people and animals from their homes either as a preventative step, or sometimes in an emergency when a fire is close to the property. Other duties include placing road cordons around fires to ensure the public do not encroach onto fire scenes. As police, they assist the public as required at fire scenes and, in practice, will help the population and firefighters extinguish fires. GNR soldiers are deployed to man watch towers.

This highly-trained Special Civil Protection Force provides prevention and response to emergency situations in communities affected by serious accidents or catastrophes. It is fully qualified to be deployed in international emergencies when necessary.

It has around 500 personnel and intervenes in fighting rural fires, water and mountain rescues, analysis, logistical support, reconnaissance and situation assessment. The NADAIR team produces a daily “Strategic Operational Analysis” which is disseminated by various entities. This assessment covers all areas of the country, analysing weather and fire behaviour.

The FEPC operates reconnaissance drones, enabling commanders to pre-position resources in areas of foreseeable greater risks of rural fires and operate them in decision support for developing fires. It was extensively deployed in the Odemira and Castro Marim fires in 2021 as well as most recent fires.