From January this year, the anticipated changes to Portugal’s Golden Visa scheme, resulting from the decree-law 14/2021 of February 12, 2021, came into effect.

This means that the purchase of a property that is licensed for habitation in many parts of continental Portugal no longer qualifies for the Golden Visa. Lisbon, Porto, and some coastal areas, including much of the Algarve, have been excluded. Only the islands of Madeira and the Azores remain unaffected by the changes.

But it is not all bad news for the Algarve property market as the new rules mean that large swathes of the region still qualify. Under the new rules, in order to qualify for the Golden Visa, properties licensed for habitation must be located in the municipalities of Alcoutim, Aljezur, Castro Marim, Monchique, Vila do Bispo, as well as some parts of Loulé. But, more importantly, “touristic” properties (as opposed to those destined for habitation) located anywhere in the region remain an option for Golden Visa investment. The result is that there are still various options open to non-EU nationals seeking a fast track to Portuguese and EU residency by way of property investment.

Other forms of investment approved by the government of obtaining the Golden Visa, such as capital deposit or investment in businesses or investment funds remain available and are increasingly attractive options for some. But let’s look at what options are currently available in the Algarve for those still wishing to combine the flexibility offered by Portugal’s Golden Visa with property ownership.

The ARI (Authorisation for Residency by Investment), to give the Golden Visa its official name, was introduced in 2012 to generate much-needed investment for the country following the last financial crisis. Since then, it has generated over €6 billion of investment for the country, predominantly in Lisbon via the purchase of a property. In the Algarve, however, most Golden Visa sales over recent years have been on resorts, where the properties, although in many cases suitable for full-time habitation, are usually licensed for touristic use rather than for habitation, and here nothing has changed.

Estate agents in the Algarve report a rush of Golden Visa buyers in 2021, ahead of the end-of-year deadline. Buyers came from the UK in the post-Brexit scenario and from around the world but, in many cases, they were misguided or simply misinformed. Many did not realise that to actually live in Portugal, the D7 Visa, which does not require any investment and does not carry the high costs of the Golden Visa, could be a more suitable option.

To qualify for the D7 Visa, all that is needed is a place of abode, that can be owned or rented, and proof of a sufficient source of income to support oneself. The big difference, however, is that, under the D7 Visa, the candidate must become a tax resident of Portugal, effectively living here.

The D7 Visa, like the Golden Visa, is also applicable to the NHR (Non-Habitual Resident) tax regime, meaning that for most people actually looking to live here full-time it is a perfectly viable option.

The Golden Visa, however, has the advantage for many international investors of offering total flexibility, meaning that the applicant can remain a resident of their home country and spend as much time as they wish in Portugal and anywhere else in the Schengen Area.

Both visa options provide a route to Portuguese citizenship, meaning that, in the sixth year, the applicant can apply after taking and passing a Portuguese language test.

Golden Visa holders can also renew their status after five years, for subsequent periods of two years should they wish to keep their temporary residency or five years if they want to apply for permanent residency (passing a Portuguese exam is also required).

All options considered, the Golden Visa is still the preferred option for those who can afford it and require flexibility in terms of tax residence. 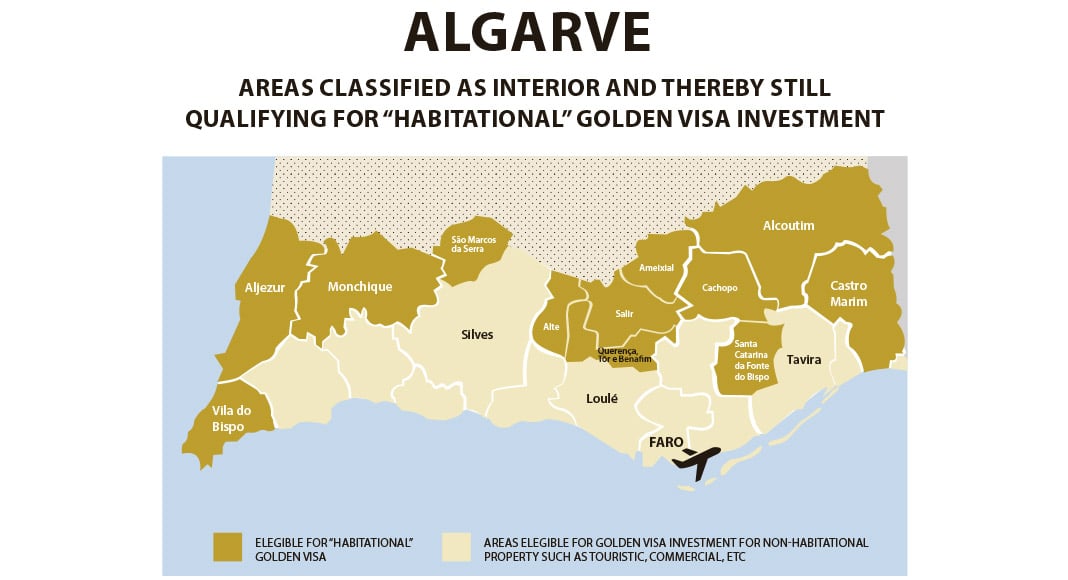 The shaded areas in the map are the so-called “interior” areas in the Algarve (although some are on the coast, which can be confusing, but this is explained by the fact that they are classified as low-density areas) where it is still possible to qualify for the Golden Visa by purchasing a property licensed for habitation for a minimum investment of €500,000, or a minimum of €350,000 if the investment is in a property over 30 years old (subject to the approval of renovation works).

Most of the shaded “interior” areas in the map make up whole boroughs (concelhos), but, in the case of Silves, Loulé and Tavira, there are inland parishes that still qualify.

This map shines a particularly favourable light on one of the Algarve’s most desirable new resort developments, the Ombria Resort in Loulé (Querença), which is in an area classified as “interior”, making all of the properties on this development qualify for the Golden Visa, either because they have a touristic licence (e.g. its Viceroy Hotel apartments) or simply because of the location, meaning that other properties such as their individual villas, which are licensed for habitation, also qualify.

The touristic licence route
Decree-law 14/2021 clearly states that the ban on Golden Visa application in some coastal and city locations applies to residential property with a licence for habitation (habitação in Portuguese) and it is clear that it does not apply to any other designations of real estate, such as commercial, industrial, farmland, and touristic property.

Whereas in and around Lisbon most of the property developments that were built for and marketed to international buyers were licensed for habitation, a large proportion of projects here in the Algarve were developed from the outset under touristic licences.

There are countless examples along the region, such as the residences and penthouses at the Wyndham Grand Algarve resort in Quinta do Lago and the luxury apartments at the new W Algarve hotel, near Albufeira.

Elsewhere along the coast, the Carvoeiro Gardens project is a typical example of villas developed together on a single plot with shared facilities, also under a touristic licence. But in some cases, even large luxury villas can still qualify, such as the L&N Residences also near Carvoeiro, where four villas with interconnecting underground garages were developed together as a touristic project.

The Palmares Ocean Living & Golf Resort, near Lagos, is an example of a development on the coast that has a mix of residential and touristic properties for sale, meaning that this resort development, like many others, still has various options for Golden Visa buyers.

Whilst many projects in the Algarve have been developed only with licences for habitation, it is likely that future developments targeting the international buyer market will opt for the touristic licence and keep the doors open to Golden Visa investors.