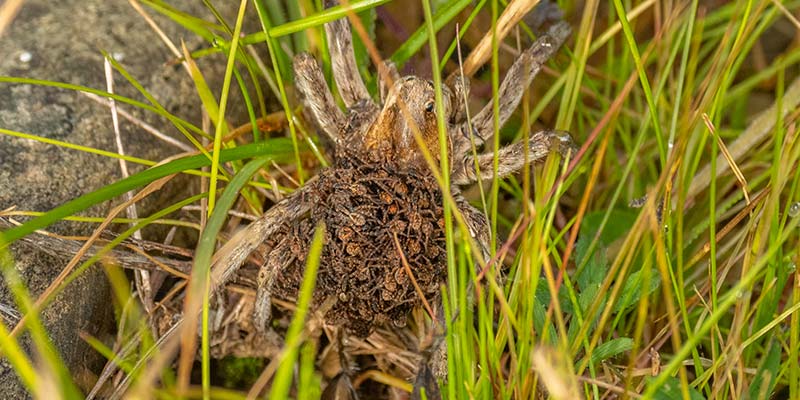 The bees are active in the spring warmth, but what is lurking, waiting, watching? Every day the weather seems to be improving and the sun is getting higher in the sky, bringing some warmth which is bringing creatures out. I was in the garden watching what seems like hundreds of violet carpenter bees clumsily flying around looking for the best flower and, of course, all other species of bees are busy collecting from any available flower, too.

For the first time, I also witnessed violet carpenter bees mating, which is an incredibly quick process.

Whilst I was watching and photographing the bees, something moved amongst the bright pink petals of the flowing bourbon geraniums we have in the garden. At first, I couldn’t see anything, but, on closer examination, I discovered a crab spider sitting patiently waiting for a meal to arrive.

The name crab spider is often used to name many species of spiders; however, the actual family of Arachnida, which crab spiders belong, is Thomisidae which contain almost 200 genera and over 2,000 species. In this case, I believe the correct species is the Thomisus onustus.

They are small spiders with the male’s body only reaching a maximum of 4mm in length and, as with most spiders, the female is considerably larger, but she still only reaches 7mm in length. The males are usually yellow or brown, but the females can vary in colour using white, yellow, brown, pink and reds. As you can see from the closeup photo, they have an odd shaped body with pointed corners.

Their colouring helps them stay camouflaged with similar coloured flowers and leaves. There is a very good reason for this; the crab spider does not spin a web to catch its prey; it sits in wait to ambush anything that comes along, particularly a bee, fly, butterfly or anything else attracted by its location. The violet carpenter bee is a giant compared to the crab spider, but I sat and watched it try to catch one on numerous occasions, but, of course, it had little chance being so outsized. Honey bees would not be so lucky.

Crab spiders are commonly seen in Portugal but are widespread throughout most of Europe, including the UK. The male crab spider can relax as, during June, when mating season begins, the female is happy enough for mating to take place and, unlike some spider species, she shows no aggression toward him.

On the subject of spiders, you may remember my article back in August 2018 about the tarantula wolf spider (not to be confused with the smaller wolf spider). This article is still available to read on the Portugal Resident website. I continue to monitor this burrow (I have also found two more burrows!) and, towards the end of September, she weaved the entrance to her burrow shut whilst the eggs she had been carrying in a sac hatched.

In Mid-October, I got a glimpse of her with the babies firmly attached to her back. Fast forward to a week ago, I had a rare chance to spot her outside her burrow, and her babies, now much larger, are still attached to her back. However, I also noticed a few running around outside the burrow probably off in search of a new life of their own.

Craig Rogers is a Wildlife and Nature photographer from Wales now living in the Algarve offering Photography Workshops. More information, photographs and blog can be found on his website at www.craigrogers.photography