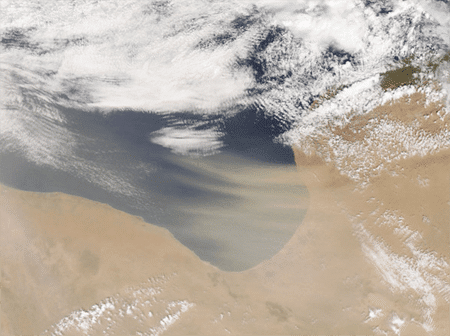 Environmental authorities have revealed that Portugal is in for some unusual weather conditions before Easter – a cloud of dust from the north of Africa.

It is set to hit the country today (April 13) as southerly winds sweep dust from desert areas such as the Saharan and Sahel regions, Portugal’s environmental agency (APA) says.

Officials warn that the “quality of air will be affected” and some precautions should be taken.

The young and elderly are the most vulnerable, as well as those who suffer from allergies and asthma, and should remain inside with the windows closed if possible.

APA adds that the dust cloud is expected to remain in Portugal until tomorrow (April 14).

The phenomenon is similar to the rain dust that stained cars a rusty brown in the Algarve in February (click here).

Despite this, the weather for this Easter weekend is set to be mostly warm, with maximum temperatures reaching 24ºC in the Algarve and Lisbon and at least 20ºC in Porto.

Forecasts are not as optimistic for sun seekers though, as high clouds are expected all over Portugal.