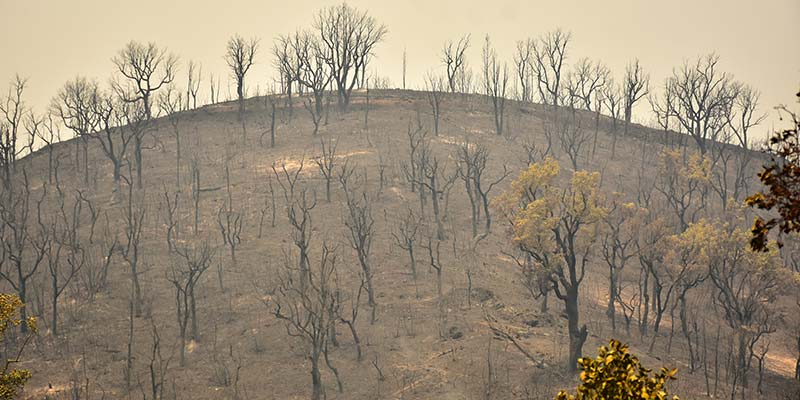 Six months after the devastating fire that ripped through Monchique, there is still no sign of the assistance that victims were promised.

Over 50 houses that were destroyed by the flames have become nothing more than ruins while owners wait for financial support to rebuild them. The agricultural sector has stagnated because thousands of hectares of land were destroyed, and local farmers are outraged by the amount of bureaucracy they face to apply for help.

Olívia Costa was one of the victims whose house was destroyed by the fire last summer and has been living in a rented property ever since. She has applied for help to rebuild, but, in some cases, people are being forced to obtain at least three budgets for the renovation or reconstruction works before the financial aid can be attributed.

“I don’t know what my future will be. There are no assurances; this is no way to live. It feels like we are slowly dying,” she told TSF radio.

In Monchique and neighbouring villages, no one understands why the government is failing them.

“If they wanted to help us, they would have created specific measures to assist fires victims,” said Paula David, an employee at the Alferce parish council.

As she explains, the bureaucracy surrounding the applications for the PDR 2020 community programme is disheartening. Some people, particularly elderly farmers whose crops put food on their table, are being forced to register at the local tax office as farmers.

Others have simply given up because they find the procedures too complicated.

José Albano, another victim of the fires, checks on his warehouse and tractor which were reduced to ashes every day. He estimates that his losses are around €30,000.

“So far no one has said anything to me,” he told TSF.

Paula David insists that government officials should travel to Monchique to see “how bad the situation is, talk to people and how promises are yet to be fulfilled”.

The association is named ‘Associação dos Lesados do Incêndio de Monchique’ (ALIM – association of Monchique’s fire victims) and has 30 members who aim to bring together the many hundreds of people who lost their houses, land, crops and animals to the flames (click here).

The fire broke out on August 3 in Monchique and was only brought under control a week later, having destroyed around 27,000 hectares of land in Monchique, Silves and Portimão.