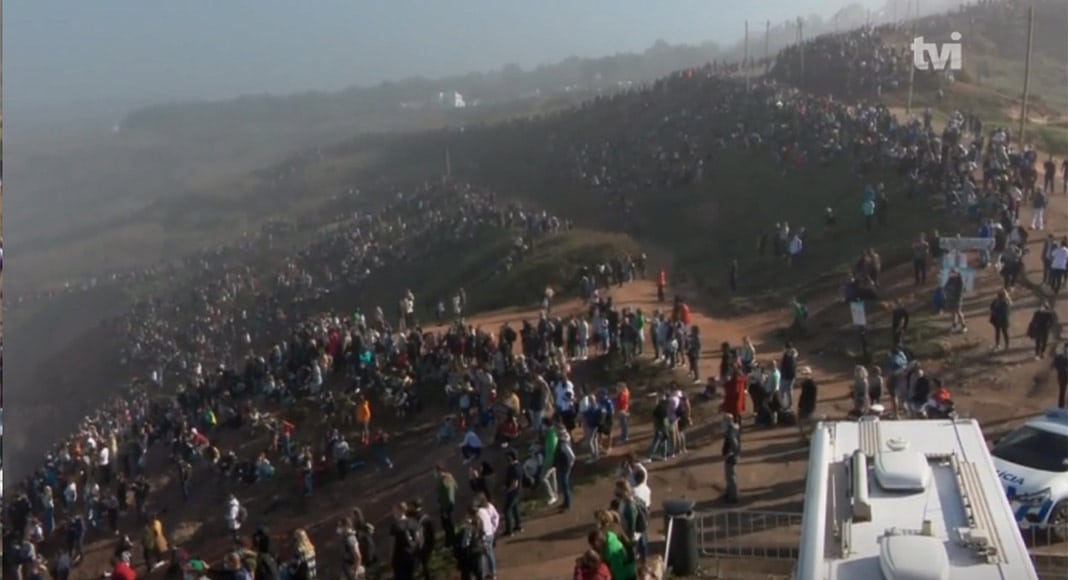 Measures to combat the spread of the virus have now extended to stopping people coming out to ‘watch the waves’.

Explain reports today, authorities have blocked pedestrian access to the famous lighthouse in Nazaré where ‘monster waves’ – and often intrepid surfers crazy enough to ride them – can be viewed by the public in comparative safety.

The reasoning is that if too many people turn out, there will be ‘an agglomeration’ which could see infections spreading.

Admittedly thousands have been turning up today after the likelihood of monster waves was broadcast over social media.

Surfers too have turned up in force, but the combined wiles of the town council and Nazaré ports captain haven’t extended to heading them off.

Mayor Walter Chicarro has admitted there are legal issues to stopping people watching the waves. “It’s complicated”, he has told reporters, as “the country isn’t closed, neither is Nazaré…”

But pedestrian access to the Forte de S. Miguel and its lighthouse is, and thus the multitude has been faced with finding other viewing points along the cliffs.

Yes, this in itself also throws up some challenges: said ports captain Zeferino Henriques “great concern” now is that people will fall from the cliffs.

The conflict is almost as large as the Nazaré waves: is this a risk worth taking? Should the ‘rules in the context of this pandemic’ take precedence?

Said the ports captain, alerts are to be broadcast “in various languages” to remind people to wear their masks and comply with social distancing and respiratory etiquette”.

This last ‘message’ shows how authorities are in fact getting lost in the miasma of all the new rules: if people are respecting social distancing, there is actually no requirement (not even now) for them to be wearing masks.

It’s unclear how much longer authorities will be trying to shepherd wave-watchers this way and that.

Says TSF Radio, these monster waves (coming just before a full moon) tend to arrive just before the major surf competitions run out of Nazaré which will be starting next month.