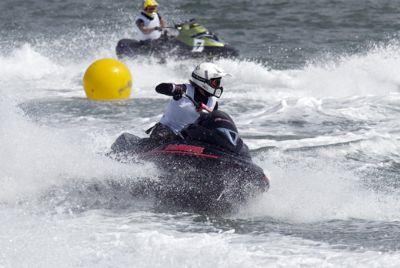 The big winner on the Arade estuary was local national champion Andre Correia representing the Clube Naval de Portimão in the principal category final for 16-year-olds, while Sebastião Rodrigues (U-16), João Nobre (U-14), Rafael Vieira (U-12) and Gonçalo Vieira (U-10) were also successful in their respective classes. The coming April 4/5 international senior event will be the first round of the 2009 UIM campaign featuring more than 20 pilots representing 14 countries. Defending world and Portimão champion Jay Price (Qatar Team) will be favourite for the Portuguese Grand Prix which has two maximum points races on successive days for the first time in the sport’s history. Before that showcase occasion the 2nd International Endurance Jet Ski Championships (‘PWC Jet Drag’) will hit the same city’s harbour with two and five-hour finals scheduled for 3pm and 9.30am this Saturday and Sunday.

Also this weekend, at a rather gentler pace and further east along the Algarve coastline, the Faro beach nautical centre is hosting the Conquilha Windsurf Challenge 2009 bringing together the best the sport has to offer nationally outside official competitions.