The Ribeira de Alportel is a small river that rises in the Serra do Caldeirão just north of the town of São Brás that grew up on its southern bank. There is some wonderful walking along the banks and surrounding countryside of the river and local councils have provided a variety of trails to suit all ages and abilities.

Close to São Brás itself, there is a 12.3km waymarked walk that begins in the village of Alportel to the north of the town. The full trail that is waymarked with red and yellow flashes begins in the small arch under the N2 road (direction Juncais) and will take you across a rural landscape that is a transition between the limestone-rich Barrocal and the schist rocks of the Serra.

The viewpoint ‘Miradouro das Castanhas’ will give you not only an amazing panoramic 360-degree view, but you will be able to see for yourselves the contrast between the mountains to the north and more gentle hills that surround the town of São Brás to the south.

Along the way, you pass through the hamlet of Farroba with its public wash house and piston wheel pump and its typical Algarvian houses – single storey, whitewashed with typical ‘lace’ chimneys.

For those who prefer something shorter, there is a stretch of this trail that offers a 4km walk, but it’s not flat as you must walk down to the river and then back again. It begins at Fonte da Tareja and coincides with the Ribeira de Alportel biodiversity station. This was inaugurated in 2012 and its aim is to create a route that not only educates the visitor but acts as a ‘window’ for the natural heritage of the São Brás municipality.

The route follows the margins of the river from Fonte da Tareja through to Vale de Estacas and offers the walker a great variety of flora and fauna. Along the way, there are a series of information boards (eight in total) that give an insight to what is growing and living there, from trees and plants to insects, butterflies and birds.

It is just a wonderful walk because here the vegetation is lush with willow, ash and poplar trees alternating with oleander bushes and reeds. And once you have reached the end of the section, you will have no problem turning around and retracing your steps.

Approximately 12km east of São Brás, and just off the N270, lies the village of Morenos, again situated on the banks of the Alportel river but oh, so different. There is another longer walk (again waymarked) of 14.5km that will take you deep inland through the Serra – it is really, really beautiful, but it is not so easy as the walk from Alportel, with several significant climbs.

On your way, you pass through tiny hamlets such as Eira do Lobo and Malhada do Rico before dropping down to the village of Fornalha where locals still lovingly tend their small fields growing a variety of fruit and vegetables. Fornalha sits by the river of the same name and this, in turn, flows into the Alportel.

The return from Fornalha has a climb up with wonderful views down to the river valley; again, there is a wide variety of flora and fauna and, similarly, part of the walk takes you along the riverbank, but here there are no information boards, just raw beauty.

You must take care, if choosing to do this walk, that you do not do this on a hunting day (Sundays and Thursdays between September and February) because the Clube de Caça e Pesca is very active and there can be a large number of hunters in the area. Don’t let that put you off – just avoid those days.

Alportel – this is just off the N2, north of São Brás de Alportel.

Fonte da Tareja – drive to São Brás and then follow the blue signs for the ‘Centro de Medicina Física’; this will bring you to Tareja. Ignore the left-hand entrance to the Centro and drive a further 800m to arrive at the Fonte.

Walk near Morenos – take the N270 from São Brás towards Tavira. 2km beyond Santa Catarina, turn left for Morenos. After 3km, ignore the turn into Morenos, keep straight on passing the Monte Velho restaurant, then bear right to arrive at a picnic area on the right. Park here and walk down the road and over the bridge: the long walk goes straight ahead uphill, but there is a shorter walk signed to the right.

Julie and her team lead walks every Tuesday morning and every other Friday. All are welcome. There is a nominal charge of €5 per person and this includes a donation to charity. Full details www.portugalwalks.com or in the diary section of the Portugal Resident.

Coming up: Tuesday, May 24 – Let’s Walk from Alto Fica 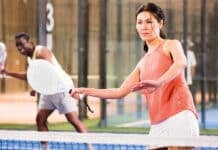 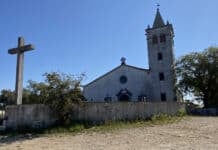 Walking at Barranco do Velho 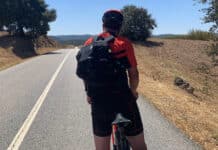 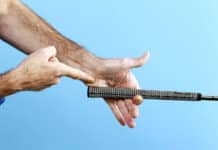 Forming the best golf grip for you 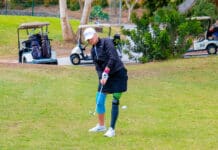 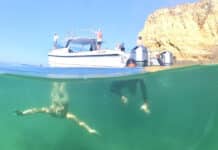 Adventure at your leisure