Portugal Resident
Home Community Walking Football for the over 50s 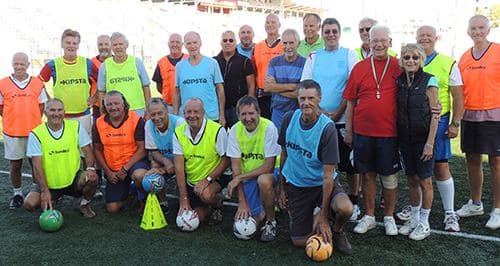 Walking Football for the over 50s has become an overnight success as more players sign-up with Soccer Olhanense Strollers (SOS).
Latest recruits are Roy McCrudden (Pechão), Kevan Collins (São Brás) and the group’s first German participant Wolfgang Eudenbach, bringing the total to 35.
Christine Wright, former head of Physical Education at Eastbrook Comprehensive School in Dagenham, Essex, and who taught Tony Adams (Arsenal and England) and Paul Konchesky ( Liverpool, Leicester City and England) has taken on the role of fitness coach.
Her experience of dealing with top athletes ensures that the senior citizens are suitably warmed up and in prime condition as aged muscles creak into action.
It is hoped that embryonic groups will form in other parts of the Algarve as the Olhão SOS group investigate the possibility of a tour to southern Spain and Gibraltar next year.
916 504903 | christopher.wright@hotmail.co.uk
Photo: Walking Football for the Over 50s. Octogenarian referee Gordon Linford (fourth from right) with fitness coach Christine Wright