Portugal Resident
Home Original Walk through the heart of the Algarve 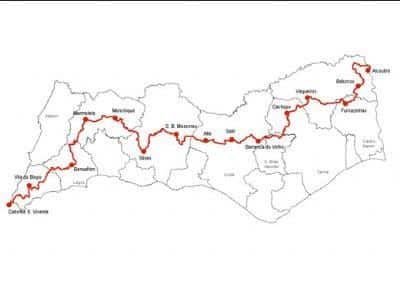 Via Algarviana, a 240km pedestrian walkway spanning nine councils across the Algarve’s rural interior between Alcoutim and Cabo de São Vicente, is due to be officially inaugurated on May 29.

João Ministro, a spokesman from Almargem, the local environmental association that spearheaded the project, told the Algarve Resident: “We are inviting many people to the inauguration party, which will be held in Barranco do Velho in the Serra do Caldeirão.

“These include the presidents of the Câmaras that have been involved in the project, the president of the regional development commission CCDR, Portugal’s minister of the environment and many friends and partners.”

During the event, an official bi-lingual guide to the Via Algarviana will also be launched.

“This 100-page guide will be a comprehensive tool for walkers who will be travelling along the Via Algarviana and will include lots of information such as a detailed map of each section of the walkway as well as details of accommodation and places to eat along the way,” said João Ministro.

This guide will be distributed free in tourist information offices across the region as well as in Câmaras, parish council offices and in the establishments mentioned in the publication.

According to Almargem, the aim of the entire project, which costs around 350,000 euros, is to promote sustainable development in the region’s countryside areas through the promotion of its cultural and environmental heritage.

It is hoped the walkway will become the backbone of the region’s country walks and will help promote local economic initiatives.

Despite its recent completion, some of the signs along the Via Algarviana have already suffered from vandalism, especially in Alte and Messines where signs have been ripped out of the ground.

“This is a shame, but we have already replaced the damaged signs,” said João Ministro. “If users of the walkway see any damage or vandalism to signs, we encourage them to contact us so that these can be fixed or replaced as quickly as possible.”

As well as ensuring that there will be a maintenance plan to guarantee that the entire walkway is kept in good condition in the future, Almargem has also contacted each council with information about the path, so that parts of the walkway are not cut off with fencing by landowners.

“There are cases where the councils do not know whether paths are public or private, but we identified these several months ago and sent the information to the councils,” said João Ministro.