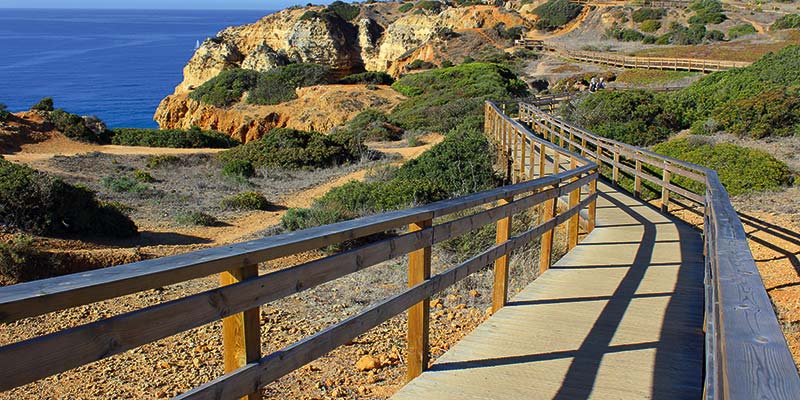 Living near the ocean can benefit your mental health, and the Algarve is perfectly positioned for this type of therapy.

As one of the most scenic ways to explore the outdoors, getting outside around the coastline has a lot more benefits than just a pretty view. “Staying active helps promote good mental and physical health,” says Teresa Hughes. “Walking, simply spending time in nature will enhance wellbeing.”

Teresa is a counsellor and bereavement therapist who lives in the Algarve and provides English-speaking counselling sessions online. Through both her professional and personal experiences, Teresa stresses the importance of enjoying the outdoors. “The environment we live in directly impacts on our mental wellbeing,” she says. “We are fortunate living in the Algarve, having access to dozens of stunning beaches and beautiful countryside.”

According to an article posted by The Telegraph in October, people living close to the sea are happier and have better mental health compared to those living inland. The article is based on a research study conducted by the University of Exeter, which suggests that people who live within one kilometre from the coast are nearly 22% less likely to experience symptoms of mental health disorder versus those living 50km or farther away.

With over 150km of coastline, Portugal’s southern border boasts the perfect place to ward off those winter blues. Keeping both the article and Teresa’s words in mind, we visited four walkways along the Algarve’s coast for inspiration on getting started on the journey towards better mental health.

Ponta da Piedade, Lagos
Just 3km south from the centre of Lagos, Ponta da Piedade is a staggering mix of golden limestone cliffs, lush greenery and turquoise waters extending as far as the eye can see. The coastline features remarkable formations of sea pillars, arches and hidden grottos carved within the cliffs. From the footpaths running along the clifftops, one can spot boats of all shapes and sizes drifting out on the ocean’s surface parallel to the coast. A set of stairs spirals down one of the cliffsides and spits out to a cove, where a cluster of people eagerly await for the next arriving boat tour. The 2.5km Ponta da Piedade boardwalk follows the western side of the coastline, complete with breathtaking viewpoints, shaded seating sections and a lighthouse at the start of the trail. From January until late spring, be on the lookout for nesting herons and wild fig trees over­flowing with flowers. One trip to Ponta da Piedade and it is easy to see why it is considered one of the best locations in the western Algarve to watch the sunset. 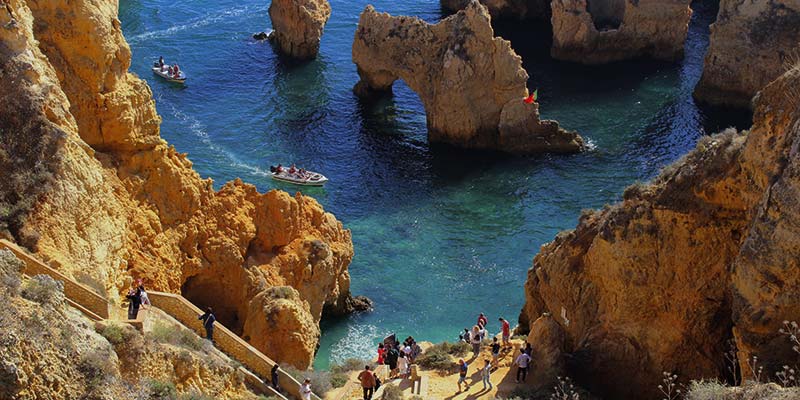 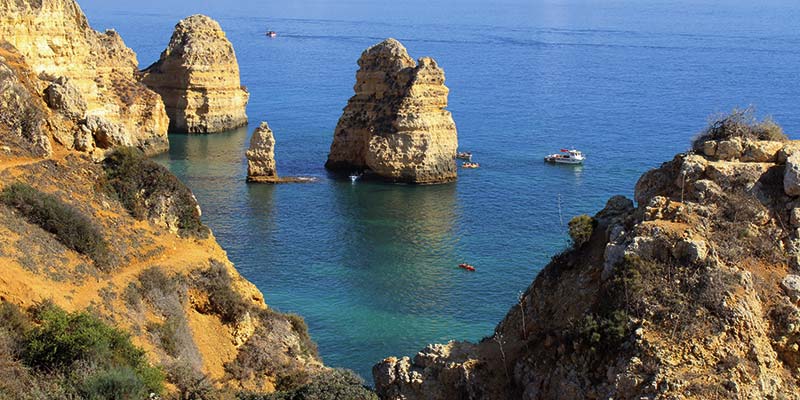 Alvor Boardwalk, Alvor
Set alongside the Ria de Alvor, the 6km Alvor Boardwalk winds through a diverse estuarine ecosystem, home to flourishing species of plants and wildlife, leading out to an oceanview like no other. The wooden pathway begins by the harbour alongside an assortment of fishermen’s huts, linking the Alvor estuary to Três Irmãos beach (eastwards). The saltmarsh landscape is overflowing with lush greenery, featuring colourful collections of purple Limoniastrum flowers, Small Cordgrass, Yellow Broomrape and plenty more. As an avid hub for birdwatching, be on the lookout for the variety of species that call the Alvor Boardwalk home, including the Caspian Tern, Stone-curlew, Hoopoe, Bluethroat and even the Greater Flamingo. The path treks on towards a tiny lighthouse, offering a breathtaking view of the Atlantic and Alvor’s spacious stretch of beach. Explore the trail during dawn or dusk for an exceptional view of the sunrise and sunset. Whether one chooses to bike along the boardwalk or enjoy a leisurely stroll, the Alvor Boardwalk is one of the Algarve’s coastal walkways not to be missed. 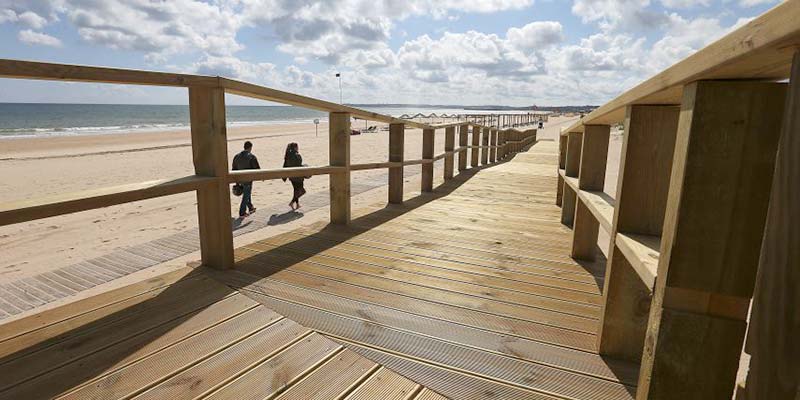 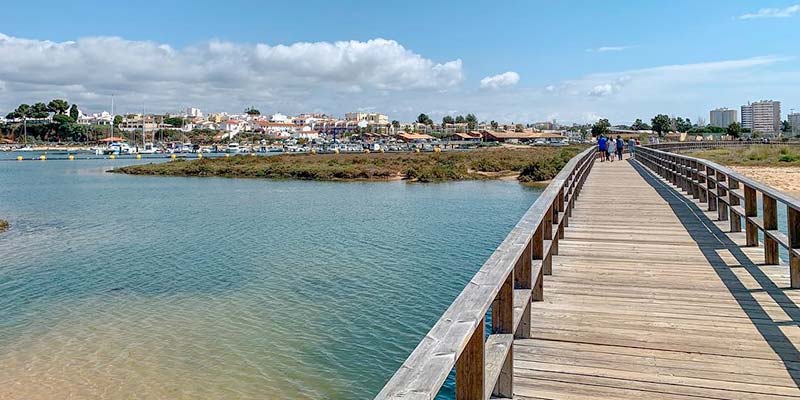 Seven Hanging Valleys Trail, Lagoa
The Seven Hanging Valleys Trail gets its name from the seven “watercourses” that intersect with coastal cliffs and overtime have formed small valleys. The multitude of mesmerising geological formations are chiselled out from the calcareous cliffs, including arches, caves, gorges, and stacks. In addition to these colossal limestone sculptures, the trail is dense with vegetation, offering a chance to cool off in the shade from towering mastic trees, loftier pines, junipers and kermes oaks while gulls, cormorants and doves soar above. During our visit, a group of artists perched near the cliff’s edge worked to transfer the scenic sight onto canvas, using a seaside palette to recreate the masterpiece. With the 6km trail running between Praia da Marinha to Praia de Vale Centeanes and pinpointing multiple stops along the way, you do not have to embark on the entirety of the Seven Hanging Valleys Trail to enjoy all it has to offer – though with every step, the journey is only bound to get better. 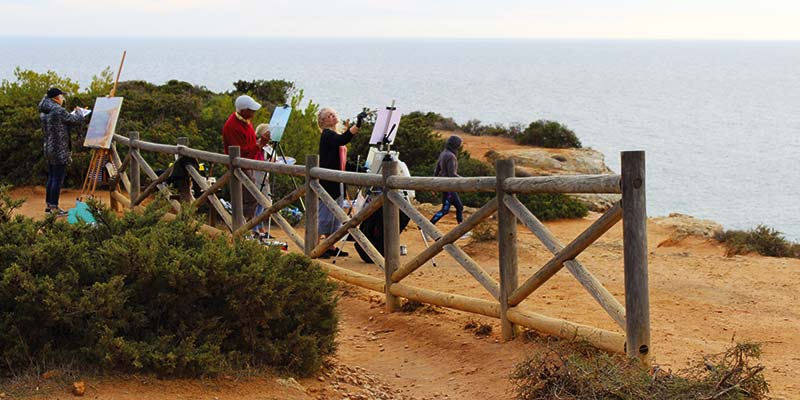 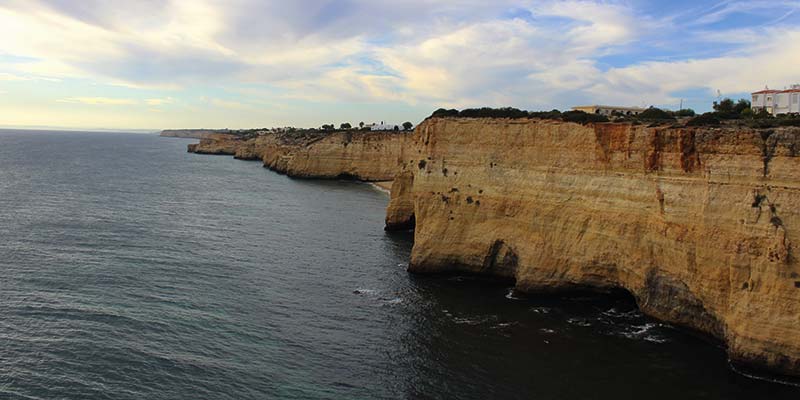 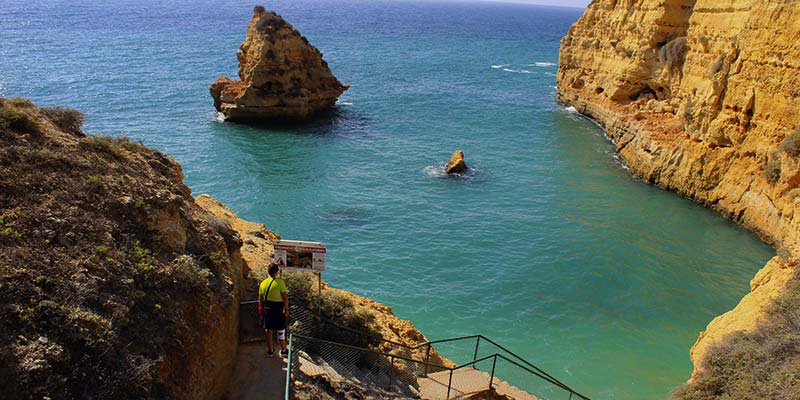 Praia do Barril Trail, Tavira
At the heart of the Ria Formosa Natural Park, the Praia do Barril Trail begins with a narrow white bridge, with the option to continue the trek through the saltmarsh on foot or via a tiny train. The path leads towards Praia do Barril, where the soft sound of the Atlantic Ocean lapping against the shore is therapeutic. The 3km journey winds through the greenery, spotted with plaques of information about local birds (such as waders, herons, and gulls and terns) to be on the lookout for. Once you reach the beach, the trail splits off in opposite directions. The area to the right is protected by palisades for the restoration of a dune cordon. To the left, dozens of anchors dot the shore as part of an “anchor cemetery”. Even on a cloudy day, the Praia do Barril Trail is so much more than just your average walk to the beach. 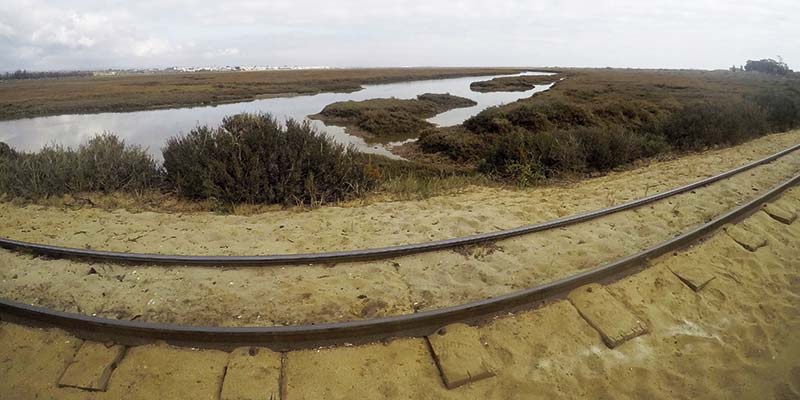 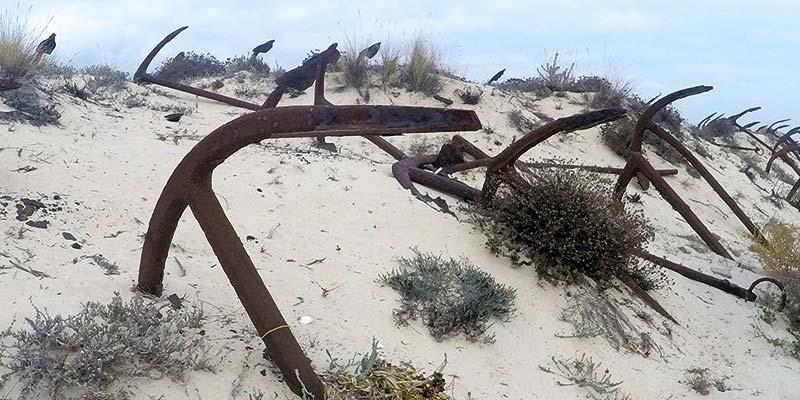 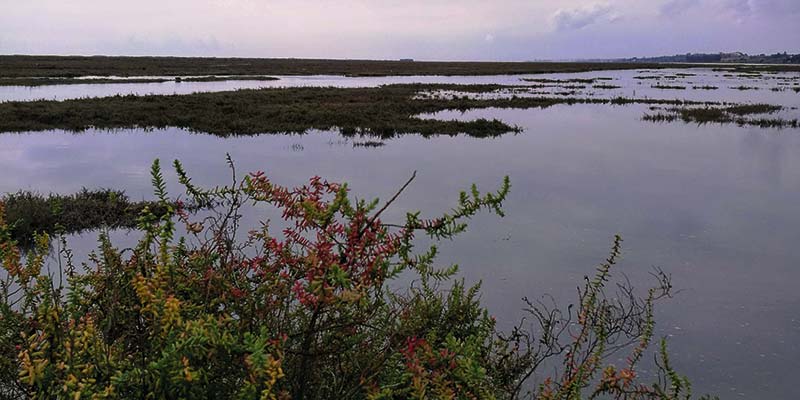 Aldeia Nova Interpretation Trail, Monte Gordo
The Aldeia Nova Interpretation Trail — where forest meets ocean. Both maritime pines and stone pines line the 1.5km path, joined by clumps of soft-green cacti with pops of pink prickly pears to colour the walk as well. One can find a prime birdwatching area (with waterfowl like ducks, herons and grebes) on the banks of the fenced-off lake, which was built to act as a water reservoir. Keep a close eye for any camouflaged lizards that may have wandered in from the neighbouring Trail of Chameleons. While the total submersion into the pine forest might suggest otherwise, the smell of salt wafting through the air is a pleasant reminder that the sea is merely steps away via a short boardwalk near the southernmost part of the path. Be sure to pack a picnic for the trail’s shaded picnic-tabled area to enjoy post-walk.

Whether you embark with a group, friend, pet or simply solo, the Algarve is home to a seemingly endless list of adventures. So wherever the journey takes you, here’s to a head start on better mental health and getting your daily dose of Vitamin Sea. 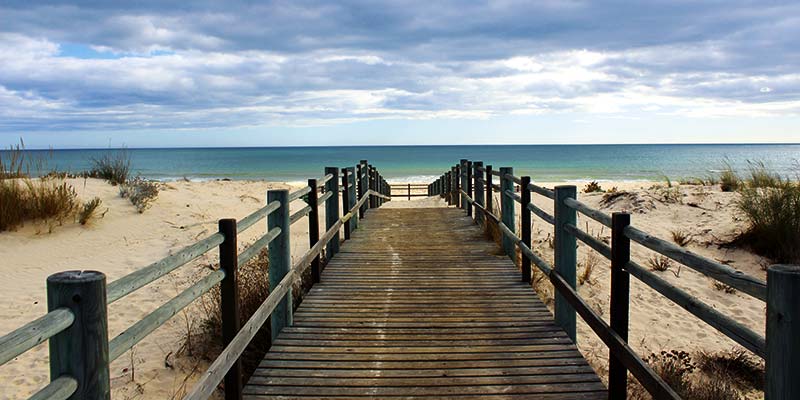 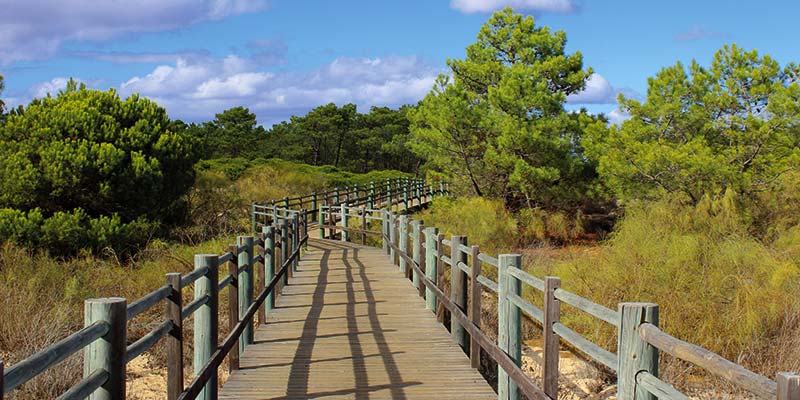 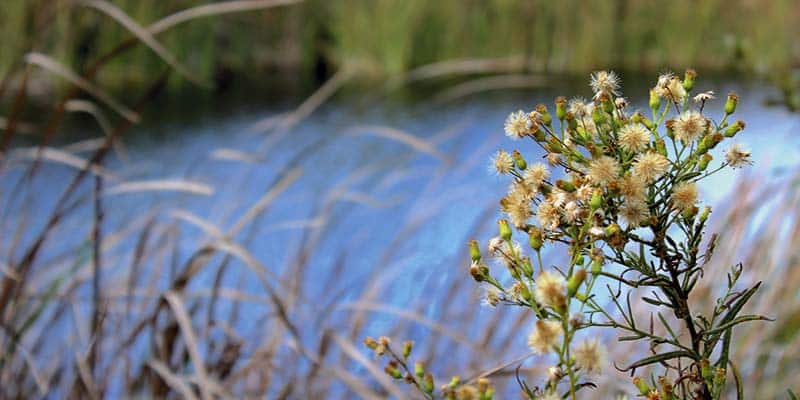