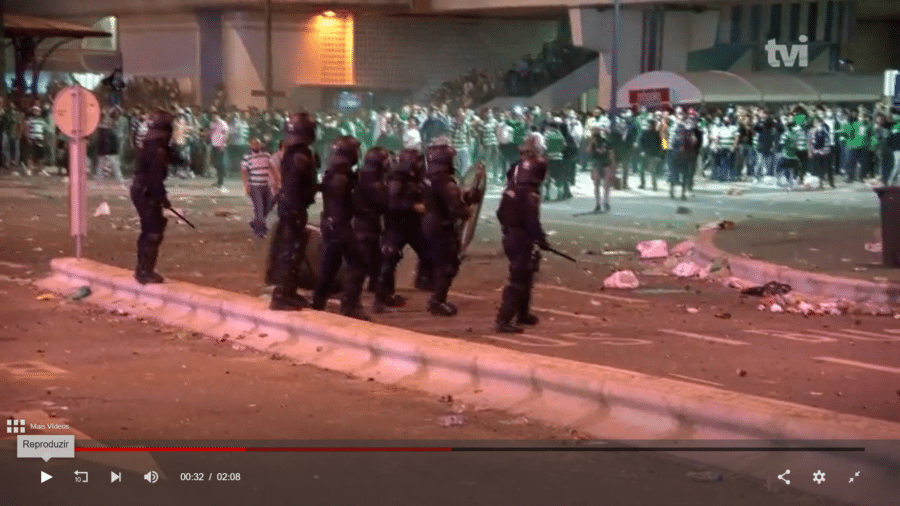 Violent confrontations have been taking place in Lisbon this evening involving thousands of football fans and the police.

The trouble began mid-way through the game between Sporting-Boavista game at Alvalade Stadium to determine Portugal’s next ‘national champions’.

It seems to have begun with ‘a huge plume of smoke’ (possibly an incendiary device) that saw police moving in in force – at which point the crowds retaliated by throwing stones and bottles.

Rubber bullets were fired – a TVI journalist is understood to have been hit by one of them in the leg – and at the same time inside the stadium the match continued underway.

Tensions had been growing through the afternoon as more and more fans turned up in anticipation of the game.

President Marcelo and DGS health authorities appealed for good sense, but it seems to have been lost after Sporting scored a goal just before half time.

Various people have been reported with injuries. Police are said to be reconsidering their escort of the ‘parade of champions’ (the bus carrying the victorious team, followed by cars) which is scheduled to drive through the streets of the capital.

As this report went online, the match ended with Sporting the victors – national champions for the first time in 19 years.

Television stations however are talking of a ‘celebration ruined’ as the ‘parade’ does seem to have been cancelled.