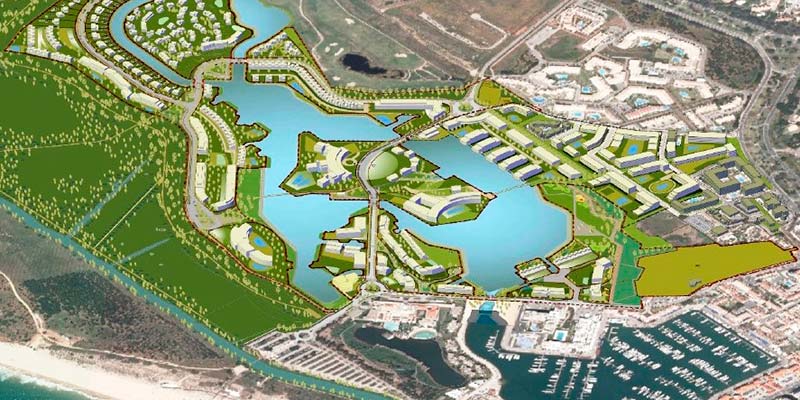 The ‘Vilamoura Lakes’ project is facing its first major setback after its environmental impact study (EIA) was suspended so that developers can diminish or eliminate the “negative effects that it will have on the environment.”

The decision was announced this Friday by the Algarve’s regional development commission (CCDR), which says that the suspension will last a “maximum of six months”.

If the project is not changed in this time, it could be rejected altogether.

As CCDR explains, the project does not seem to take into account that the area is “one of the most vulnerable” to the expected rise in the sea level along the municipality’s coastline.

In other words, the area will be especially susceptible to floods in the future, especially due to the effects of climate change.

In fact, these risks have been outlined in a study promoted by Loulé council and headed by Specialists from the University of Lisbon’s Faculty of Science and the Dom Luiz Institute.

The commission also highlights the negative impact that the project would have on the area’s cultural and archaeological heritage, landscape and biodiversity.

CCDR explains that its decision took into account nearly 100 opinions that were submitted during the public consultation of the project’s EIA, including feedback from several citizen groups and environmental NGOs.

It adds that if the project is indeed altered by developers, there will be a new public consultation period before the commission makes its final decision.

Readers may recall that the project involves turning a 57-hectare area into a sprawling development with villas, holiday homes, restaurants and several artificial lakes.

Earlier this month, a citizen’s group criticised the project, which represents a massive €670 million investment, calling it an “environmental attack” on the sustainability of the Algarve (click here).

Environmental association Almargem also slammed the plans, saying it would “sink what was once the biggest agricultural patch of land in the region”.