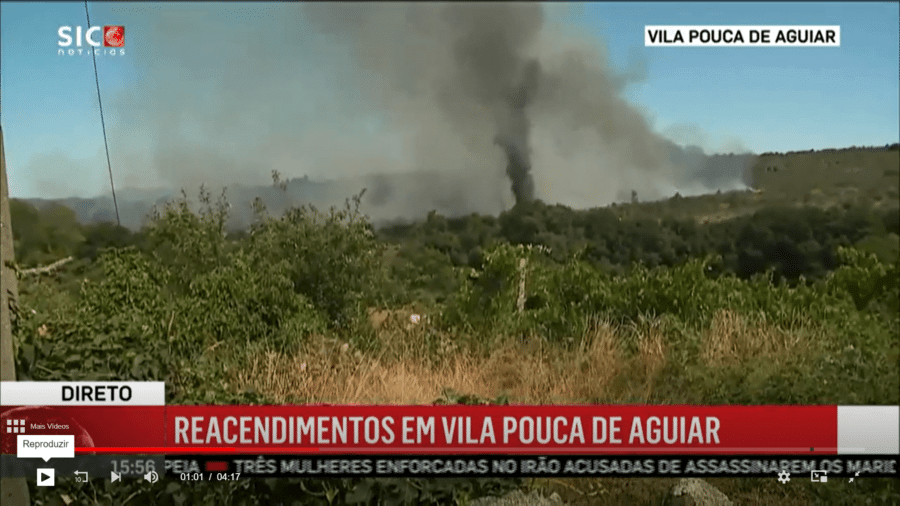 With two significant fires ongoing today, the one in Vila Pouca de Aguiar (Vila Real) is causing most concerns. It has been burning for three days now. Every time firefighters classify the fire as ‘dominated’, it reignites in one of the many hotspots. Today’s latest reignition was described shortly before 4pm this afternoon as gaining speed and ‘threatening the village of Cidadelha’: 400 firefighters are on the ground with five air support.

Elsewhere there is another significant fire in Góis (Coimbra district), currently being tackled by 300 firefighters and nine air support. As the afternoon wears on, reports suggest this fire too may be threatening homes, in the village of Amioso Cimeiro.

SIC television this afternoon has explained that air firefighting has been frustrated by blazes breaking out “almost simultaneously” – hence why the Vila Pouca de Aguiar blaze only has five aircraft right now.

Temperatures this weekend are high and likely to keep climbing, adds the station.

Both fires now have been brought under control. The Vila Pouca de Aguiar incident is described as ‘in resolution’, with over 200 firefighters still on site, backed by appliances, but with no air support; Góis is ‘in conclusion’. The new problem today is Paços de Ferreira (Porto district), a blaze that began around 12.30 and which has already got three air support aiding what are still a very limited number of firefighters on the ground.