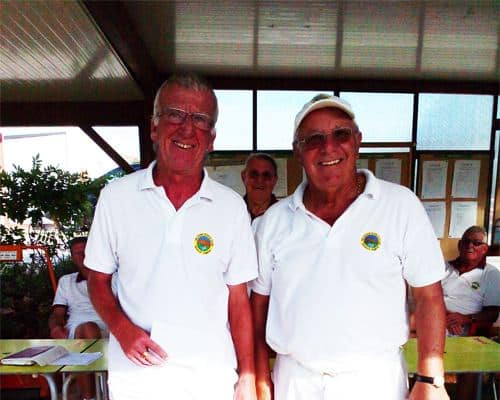 Valverde Lawn Bowls Club in Almancil held its Anniversary Pairs Competition on Friday, September 19.
Twenty-two pairs competed, each playing three games within their drawn group. Competition was fierce and a fine sunny day meant that the games were well supported.
Club President Henry Parlour presented the trophies to the winners. On reading out the results, he began with sixth place which he and partner Maria Romano had achieved. In fifth place were Betty and Peter Harris of Pedras Bowls Club, and fourth were Marianne Whitehead and Barry Brice of Valverde.
Highest placed club members were Alan Hyatt and Jack Romano who came third. Second were Tony Crawford and Lorna Bateman of Pedras who lost on shot difference to Kate and John Hewitson of Vilamoura Bowls Club.
282332628 | www.valverdebc.co.uk
By Alan Preece
Photo: Alan Hyatt and Jack Romano