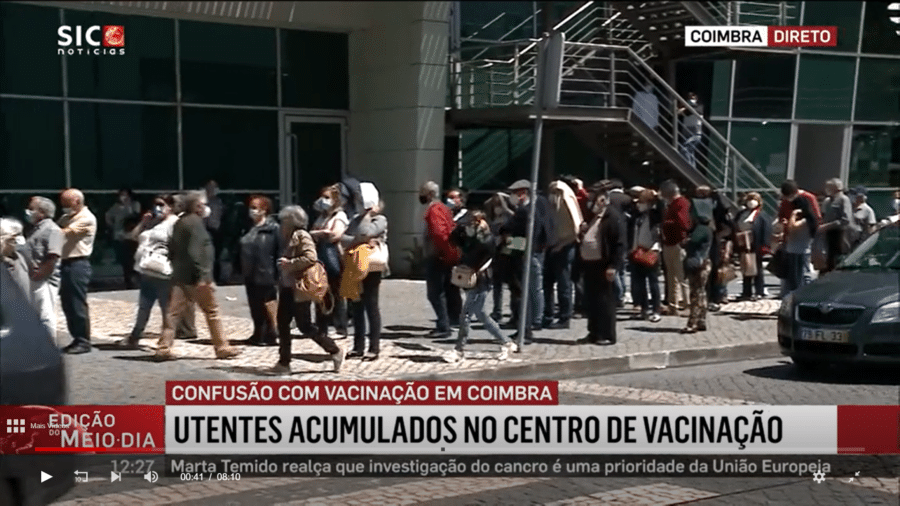 Portugal’s vaccination programme is being presented as advancing in leaps and bounds. But this is the picture powered by national media. The reality is very different, say numerous people in their 60s and 70s – some who claim they haven’t yet been contacted (when the official line is that all the over-70s will have started their vaccinations by last Sunday), while others say they simply cannot get the ‘self-scheduling platform’ to work for them.

After a weekend in which authorities insisted that traffic into Portugal from Spain was being controlled at the borders (when it patently wasn’t click here), this seems to be just another example of expedient spin versus the truth.

Portugal is waiting with baited breath to hear if it makes the green-list for Britons desperate for the sun this summer. It makes total ‘sense’ for the authorities to gild the country’s vaccination situation.

But cracks have started showing left, right and centre.

In areas around Lisbon over the weekend hundreds of people carrying text messages telling them they had appointments for their first shots turned up at the doors of vaccination centres that were firmly closed.

SIC television news conceded that this was down to “a failure of communication between the regional health authority of Lisbon and Vale do Tejo and the shared services of the health ministry”. “Something” (for that read nothing) was causing situations with the self-scheduling platform for the over-65s, said the station.

In Coimbra this morning it was the same thing: “enormous queues” involving throngs of people incapable of maintaining correct physical distancing – all due, seemingly, to those who had booked their shots through the self-scheduling platform.

And in Alcabideche (on the Lisbon periphery) 2,100 people turned up for their shots when only 1,200 could be accommodated.

In the Algarve, the Resident has been contacted by one expat Brit aged 69 who has done everything she can think of to get her shots, but keeps running into a thick bureaucratic fog.

“Everyone is just passing the buck”, Jane Jones of Odelouca told us. “I am starting to run out of possibilities. I read about the vaccination programme being promoted in the press and how important it is that the older groups are vaccinated, yet the whole booking system seems to be running on faulty software which is actually preventing people getting the vaccinations they are queueing up to get”.

Ms Jones accessed the online self-scheduling platform on April 10, and was given a date (last Saturday May 1) to receive her first shot. She waited for the confirmatory text message which never arrived.

She spent the week before May 1 “ringing and emailing various health departments trying to get my booking confirmed. When the day came, and I turned up at the vaccination centre, I was refused entry. So were at least 2 other people I saw there…”

We have received other emails from readers who actually upbraid us for ‘misreporting’ (when we are simply repeating what is being reported in the national media).

Nikolaus Blin for example told us that he knows of several individuals in their 70s who had definitely not been contacted to receive their vaccines by last Sunday.

“It would be prudent to be careful with overly optimistic time tables, official statements etc.”, he warned.

Which leaves the question, how can one give an accurate picture when authorities are saying one thing, and people clamouring to be vaccinated are experiencing another?