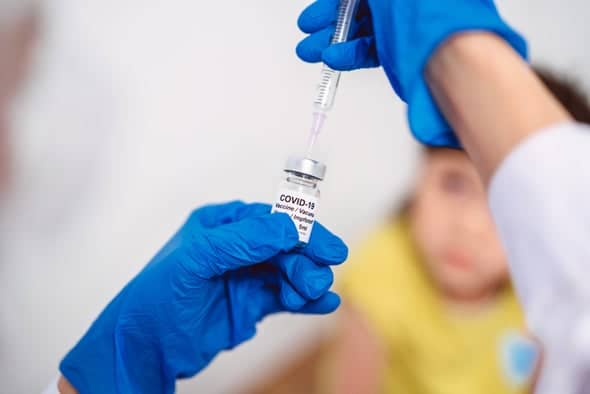 From today until Sunday, around 154,000 children between the ages of 5-11 will be being vaccinated in the mornings at centres up and down the country, while teachers and educators in creches and tutorial centres (ATLs) will be eligible for their boosters in the afternoons.

The latter point has satisfied teachers’ union Fenprof – which had been demanding booster shots to be rolled out for their members ahead of the start of the new school year – but the fact that only 154,000 children have been ‘booked’ to receive vaccines has not.

Authorities hopes are that over time parents will change their attitudes.

Certainly, ‘discrimination’ exists in schools if children are not vaccinated (click here). But it may be less felt if the bulk of children are in the group that is being discriminated against.

For now, Fenprof is blaming politicians and the DGS for this situation.

Says a statement issued this week: “Politicians and public health authorities carry elevated responsibility for the weak levels of vaccination among children. A year ago they repeatedly said that Covid-19 was not a problem in these age groups (5-11 year olds) and that schools were places of safety, not of promoting contagion. A year afterwards, in their zig-zagging discourse, they have come out and affirmed the contrary. It is absolutely natural that these and other conditions do not benefit the higher interests of public health, generating doubts in the country”.

Doubts also have been generated by a number of medical specialists, the latest coming on Christmas Eve (click here).

It remains to be seen if the next few days see ‘more children’ coming forwards for their shots in the ‘Open House’ regime.

Meantime, new controversy has blown up over comments by under secretary of state for health Lacerda Sales recently, in which he claimed 90% of people in intensive care units with Covid-19 were unvaccinated.

It was a statement that raised new questions on information given in the recent past (click here) – and he has since admitted that the percentages vary throughout the country.

He also amended his statement to include ‘people whose vaccination status was not complete’, which was always likely to have been the basis for the soundbite: the truth is that the elderly are still the victims of Covid-19 in Portugal, and those that have not received their booster shots have a marked reduction in antibody levels as the vaccines’ protective strength wanes over time.

Even the ‘boosted’ strength conferred by 3rd shots is likely to fall after around 10 weeks,  recent studies have shown (click here).