Usucapio (adverse possession), from the Latin usucapio, “to acquire by use”, is a form of acquisition of the property rights in function of having used or occupied a property continuously and unquestionably as if the holder were the real owner. In English Common Law, the equivalent of usucapio is commonly referred to as “adverse possession”.

Usucapio is a legal entity that facilitates legitimate processes of property registries that, for various reasons, were never formally legalised. There are many cases of people who cannot register a property. They may want to sell but do not know the article of registration or the land description. Alternatively, usucapio can be useful in cases where someone has verbally acquired a property but failed to sign a deed or formally regularise the transaction. In these instances, possession by usucapio may provide an answer.

For example, the heirs of a rural property fail to take possession and the land is left abandoned. In recent years, a neighbour has cultivated the parcel without interruption as if it were his own. The neighbour requests a Notary to sign a notarial justification and three witnesses testify as proof of occupancy. The deed is subsequently published in the local newspaper and, after 30 days have elapsed with no complaint, the neighbour becomes the legitimate owner of the land.

Usucapio in the Civil Code
The Portuguese Civil Code defines Usucapião in Article 1287º as the possession of the right of ownership or other real rights of enjoyment, maintained for a certain period of time, allowing the holder, unless otherwise stipulated, to acquire the ownership rights corresponding to its use. For usucapio to be recognised, it is necessary to observe certain requirements specified in law.

Good faith
Ownership must be by public deed and uncontested. When parties are assumed to be acting according to the covenant of good faith and fair dealings, then it is accepted that neither party will do anything to destroy the rights of the other party. When bad faith is presumed, one party intends to supplant the other party’s rights. 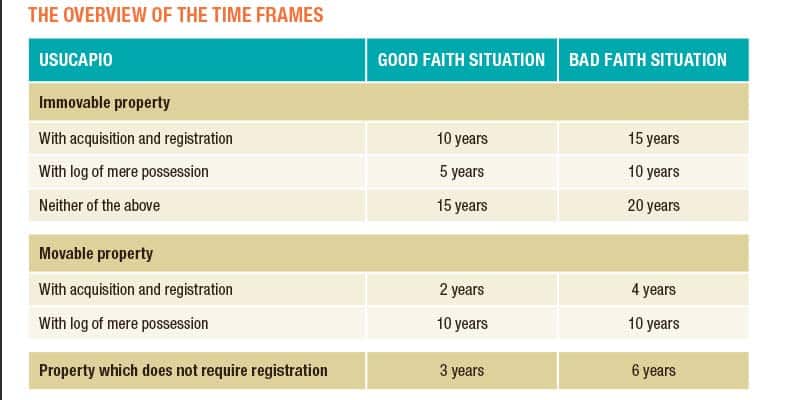