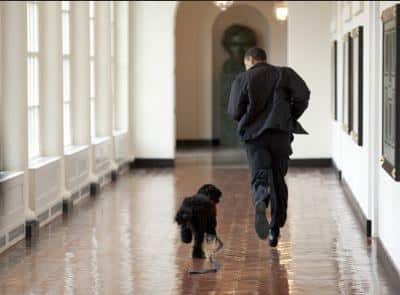 A six month old Portuguese Water Dog puppy from the US has been chosen to become the official White House pet, instead of a puppy offered by the Algarve’s regional tourism board.

The “first puppy”, which was offered by family friend, Democratic Senator Edward Kennedy of Massachusetts, has been named Bo by the President’s daughters, Malia, 10 and Sacha, seven.

Carla Peralta, from the Centre for Portuguese Water Dogs in the Ria Formosa, had also offered a puppy to the new US President via the Algarve regional tourism board (ERTA) and the US embassy. (See the Algarve Resident editions January 23 and March 13, 2009).

She told the Algarve Resident on Tuesday that the litter, from which one puppy would be donated, was born in the early hours of that morning.

“The puppy was originally for me, as I always plan litters and pre-sell them but keep one for myself, so I am not disappointed that the President didn’t choose her.” Carla added that she never really thought the puppy would ever make it to the White House. “I think it was all just a big marketing campaign,” she said.

António Pina, President of the ERTA, told the Algarve Resident: “I can’t say that I was totally satisfied, but we did our best.”

He added: “I think the fact that tourism in the Algarve was widely spoken about, as was the Portuguese Water Dog which is bred in the Ria Formosa, means that I am satisfied anyway.”