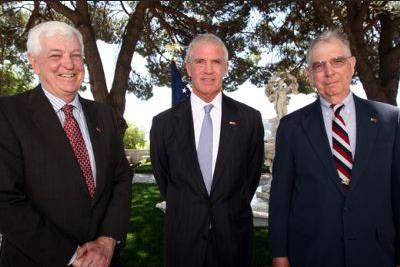 Staff past and present at the United States Chancery in Lisbon celebrated the 25th anniversary of its relocation from Avenida Duque de Loulé to its present site at Sete Rios.

The ceremony, which included music, stories and anecdotes, including the one when former President Mário Soares walked into a plate glass window at the new premises, from some of the 20 retired staff who remembered the move and inauguration on December 12, 1981, involved the presence of former US ambassadors to Lisbon, Ambassador Everett E. Briggs, his wife Sally and Ambassador Gerald McGowan, messages from US Secretary of State, Hillary Clinton and former Secretary of State George Shultz.

After a humorous welcome from press and public relations secretary, Ana do Carmo, and the Presentation of the Colours, the current serving Ambassador Thomas F. Stephenson said that while ambassador colleagues and American staff “came and went” they wanted to “feature and celebrate the foreign service nationals” or “locally employed staff” who he was “delighted to see” at the ceremony.

“A number of you were here when the embassy was dedicated, many of you have been here for 10 or 15 years, but all of you are or were the heart and soul of this embassy which is why it was so important that we highlighted you and your wonderful contributions,” he added.

Ambassador Stephenson said of Ambassador Everett Briggs: “Little did he know when he left his association with Lisbon Embassy in 1970, to serve in Angola and Latin America, 20 years later he would be returning to Portugal as George H. W. Bush’s Ambassador to Portugal.”

Ambassador Gerald McGowan, a telecommunications entrepreneur who today has a seat on the board of Portugal Telecom, was appointed ambassador to Portugal in 1997 by Bill Clinton, said “we couldn’t have done our jobs without all of you”.

“When my family, my wife Susan and I came here over 10 years ago in 1998 none of us had been to Portugal before, when we left three-and-a-half years later, like so many people we had fallen in love with the country and become enchanted with Portugal and its wonderful people.

“What she found most rewarding was her role in helping to create the breast screening charity Laco, which helps secure mammograms for women in Portugal.”