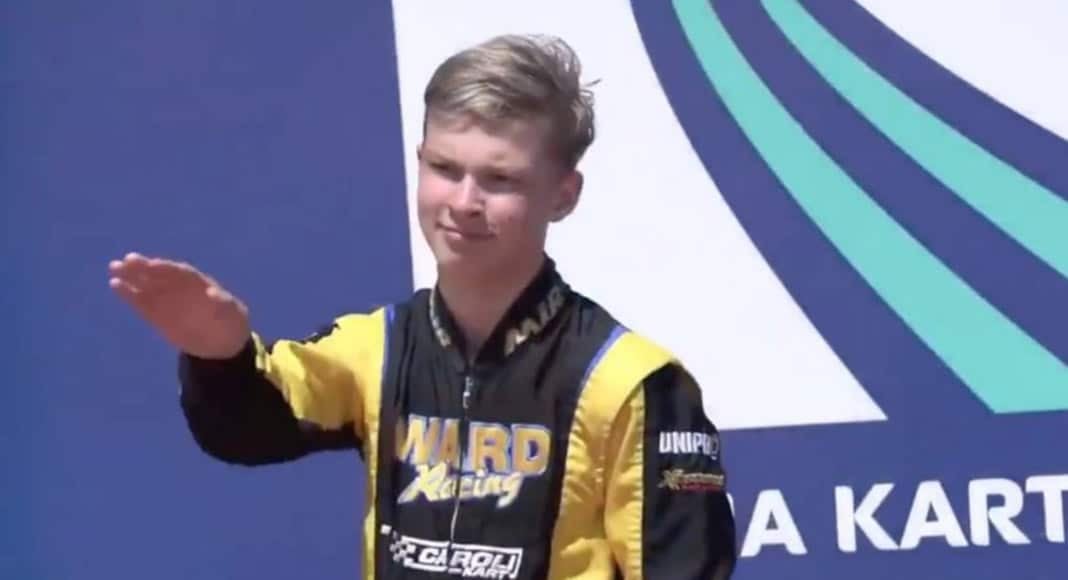 Russian karter Artem Severiukhin has seen his racing licence revoked by the Italian Automobile Club (ACI) in the wake of the controversy over his alleged Nazi salute after a race at the Kartódromo Internacional do Algarve in Portimão on Sunday.

Severiukhin had just won the final of the opening round of the FIA Karting European Championship while competing for Italy – due to a ban on Russia’s athletes competing for their country. The young driver was on the podium as the Italian national anthem was playing when he bumped his chest twice and appeared to perform a Nazi salute before bursting out into laughter.

Footage of the incident went viral on social media and, on Monday afternoon, the International Automobile Federation (FIA) announced the launch of a formal investigation.

A day later, the ACI announced its decision to revoke Severiukhin’s licence, labelling his gesture as “unspeakable and unacceptable” and adding that further sanctions were on the table.

The statement read: “Severiukhin has shown a lack of respect not only for the universal values that have always inspired every sport but also for humanity, dignity and civil coexistence.”

The young karter’s racing team, Ward Racing, has also confirmed that it has terminated his contract.

“The actions of Artem Severiukhin during the award ceremony on April 10, 2022, were exclusively individual and do not represent the views and values of Ward Racing in any manner,” said the team’s statement.

It added: “Ward Racing accordingly condemns the personal actions of pilot Artem Severiukhin during the award ceremony on April 10, 2022 in the strongest possible terms, it considers them a manifestation of unsportsmanlike behaviour, an unacceptable violation of the ethical and moral sports codex.”

Meanwhile, Severiukhin posted two videos on his personal Instagram page (one in English and another in Russian) apologising for the incident and insisting that he never meant to make a Nazi salute.

“I want to apologise to everyone for what happened yesterday. Standing on the podium I made a gesture that many perceived as a Nazi salute. This is not true,” he said.

The 15-year-old explained that he has “never supported Nazism” and considers it “one of the worst crimes against humanity”.

“I know that I am a fool and I’m ready to be punished but please believe that there was no intention in my actions, there was no support for Nazism or Fascism. There was no desire to offend spectators, fans, athletes or the team,” he said.