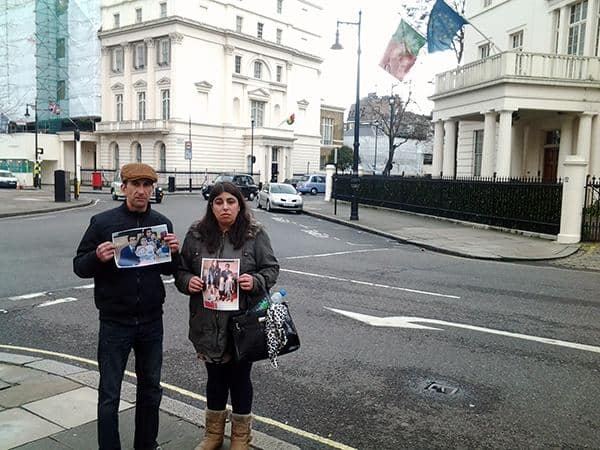 In an epic day’s work, McKenzie Friend litigators have won a pivotal battle for beleaguered Portuguese parents desperately fighting British authorities to win back custody of their five children “before it is too late”.
Public interest advocates Sabine McNeill and Terence Steele succeeded in getting Lincolnshire police to drop all charges against Carla and José Pedro – including the charge that saw them lose their entire family in one fell swoop. The charges were dropped on Wednesday morning (May 21) at Grantham Police Station “due to lack of evidence”.
The way ahead now should be the instant return of the couple’s children, the day’s heroes contended.
Writing to Lincolnshire Social Services – which removed the five Pedro children from their parents in April last year – Steele said: “The charge against José Pedro for assault on his son has been dropped due to insufficient evidence and the son retracting his statement due to a false allegation made by him.
“I therefore request that José and Carla have full contact with their five children whilst the preparation of judicial review is pending”.
Steele’s letter went out not only to Lincolnshire Social Services, but to the Portuguese authorities said to be fighting the case.
It now remains to be seen what will happen next.
Talking to the Resident last week, Sabine McNeill – fighting the Pedros’ corner for months – says this is just one of the many tactics being used to secure the children before the two youngest are lost into the adoption system.
“We have got to get the children back to their parents. Carla and José MUST be allowed contact. They have not been able to see their children for months due to bail conditions imposed over charges that have now been dropped through lack of evidence.
“This is a scandal, and we will be going after compensation as well once the children are safely home.”
McNeill told us the Pedros’ eldest child is “desperate” to be reunited with his parents, as are the others. But the eldest child’s desperation is acute as he is aware that his false testimony at school one fateful day last year is what set this family’s nightmare in motion.
Meantime, the Pedros told the Resident that they are “just praying” that things move ahead now.
Through the Resident, the family’s McKenzie Friend litigators have made contact with child’s rights campaigner Luís Villas-Boas, who runs Faro’s Refúgio Aboim Ascensão children’s refuge, and he in turn has put them in touch with the Portuguese Ambassador in UK, Dr João de Vallera.
Villas-Boas has also intimated that he would be “more than happy” to offer places to all the Pedros’ five children in Faro while their futures are decided.
This is exactly what the parents want – but how soon it can happen is still anyone’s guess.
On press day on Wednesday very little had changed from the week before.
Dr de Vallera had not responded to Sabine McNeill’s email asking him to “ensure that the children get reunited with their parents as soon as possible”, nor had anything been received from Lincolnshire Social Services.
Only Lincolnshire Police legal services department had been in touch, confirming that all charges had been dropped but querying “why Lincolnshire Police should issue a formal apology, and if so in what form it should take?”
Days earlier, police had returned much of the Pedros’ seized computer hardware, but all of it had been tampered with, José Pedro told us.
Sabine McNeill reiterated: “This whole case is just so disgustingly shameful.”
Habitually signing off her emails “with hopes and sighs”, McNeill promises to keep us updated.
By NATASHA DONN news@algarveresident.com