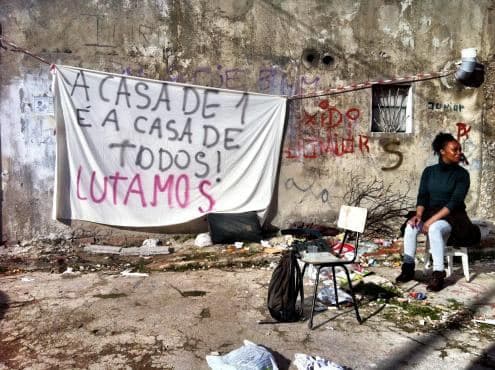 Seen from the outside, Portugal has come in for quite a pasting from UN special rapporteur Leilani Farha who came here in December to assess how the financial crisis has affected housing.

One of the main focuses of her criticism was the much-lauded Golden Visa programme – the scheme that has seen millions pouring into the country in the form of ‘foreign investment’.

Farha’s frustration is that the investment didn’t go anywhere towards improving the lot of the country’s most underprivileged – not that this was its aim (far from it).

But the fact that it simply afforded wealthy foreigners fast-track visas (and estate agents a healthy turnaround) has not been the only limit of the scheme, she claims.

The Golden Visa ‘fad’ has driven up housing prices, “exacerbating the problems for middle and low income families”.

It has also taken properties from the rental market – again leaving everyday working folk the worse off in the equation.

“Despite the enormous injection of capital” (calculated to be €2.37 billion), the Golden Visa scheme did not result in the creation of jobs and “not even a small part of the gains were applied to the development of accessible habitation”, Farha explained in the report now in the hands of the Council for Human Rights.

Farha was only in the country for a little over a week, so it is unlikely she made it down to the Algarve to see how the scheme affected prices there.

But the gist of her research was that Golden Visas have only benefitted a section of society that was already ‘perfectly well off thank you’ (other than perhaps it didn’t have free run of Schengen Space).

But that is not the only area of Portuguese policy that has worried the human rights advocate.

Farha, also executive director of NGO “Canada without Poverty”, is concerned by what she calls the “turistification” of large tracts of Lisbon and Porto so that they are rapidly becoming “enclaves for the rich and foreigners”.

Her trip to Portugal brought her face-to-face too with the government’s policy of evicting poor communities from what it deems ‘illegal dwellings’ – more usually communities in which the people have lived for generations.

Very much like what happening in the Algarve’s Ria Formosa, Farha was “confronted” writes ionline “with the evictions of the May 6 neighbourhood in Amadora” which she dubbed a “gross violation of international human rights legislation”.

In Loures, on the other side of the Tejo, she reports that she came upon conditions in the Torre ‘bairro’ (social housing project) that she “never expected to see in a developed country”.

“People living in the middle of rubbish, without electricity” were just some of the problems in an area just kilometres away from the capital.

Farha’s account will now be used to try and forge change in Portugal, but to what degree remains uncertain.

Ionline writes that it contacted the ministry of the environment for a response but did not get one in time for its publication deadline.

Elsewhere, MEP José Inácio told the Resident in a conversation about evictions in Ria Formosa that “the current environment minister hasn’t got a clue what he is doing” – a criticism that islanders wholeheartedly endorse after a week in which government promises to hear their points of view were railroaded with the help of battalions of police (click here).