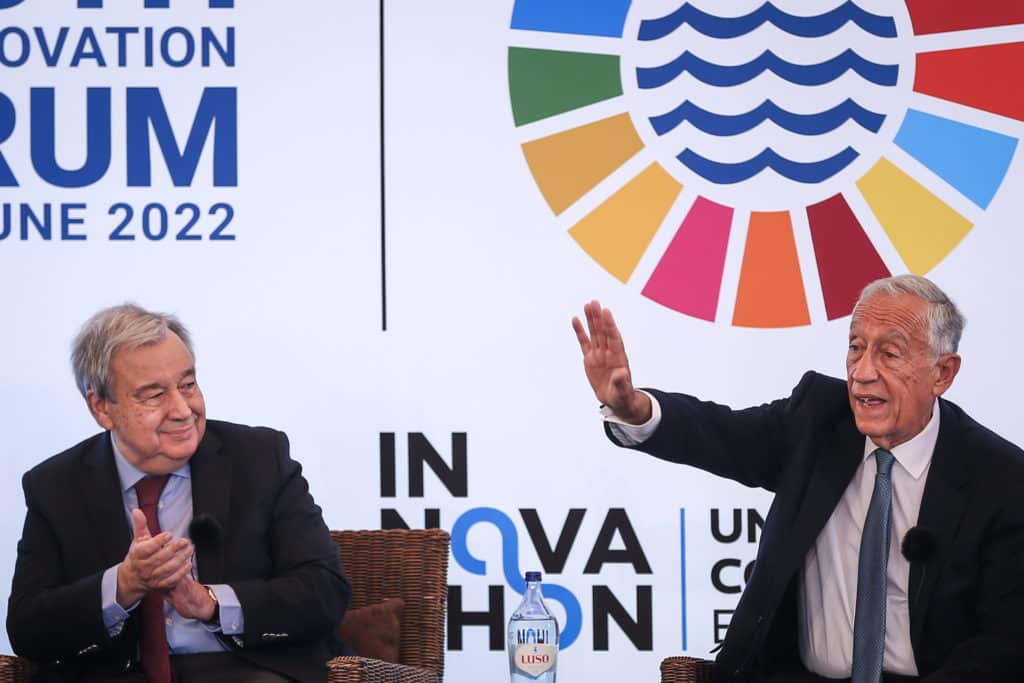 The United Nations Oceans Conference starts officially tomorrow, but events are already taking place. On Carcavelos beach today, the Forum of Youth and Innovation of the ONU Oceans Conference 2022 heard an apology from UN secretary general António Guterres, and a strange call-to-arms from President Marcelo.

“You have to fight and win for yourselves”, he told the roughly 150 young people from 30 countries assembled. “Don’t rely too much on rulers. There are exceptions. Some will always be your main allies. But not the majority. They are much older. They have so many problems. Some of them say they cannot afford to think of you enough.”

Coming a few days after Portugal’s director of health warned that “the worst thing that can happen” is for people to “get ill or have accidents in August”, Marcelo’s advice in many ways put the cherry on the cake of this week’s rather bizarre public announcements.

In the company of UN secretary general António Guterres, he stressed that Guterres was definitely one of the exceptions (that young people can trust) – “very vocal and very strong” – albeit Marcelo returned to the bottom-line: “the only way to be stronger is to fight for it, and not believe someone will do it for you. Remember that…”

He then said that while António Guterres would be giving interviews, he himself would be going for a swim – and anyone who cared to was welcome to join him.

Also on the beach was Kenyan energy minister Monica Juma (Kenya being co-organiser of the conference). She too told the young audience that “through your eyes, we can see the environment in a different way. We cannot continue to live as if the effects on the environment did not exist…”

Her appeal to all those present was to transmit “to at least five people” everything they learn during the conference this week so as to counter a world that is negating climate change.

Portugal’s minister of the economy and sea António Costa Silva – a bit of an unknown given his recent comments on offshore drilling for natural gas – was also present on Carcavelos beach, ahead of the ‘main event’ opening tomorrow at Lisbon’s Altice Arena, and expecting up to 7,000 participants from 140 countries, 38 specialised agencies and international bodies, more than 1,000 NGOs, 410 companies and 154 universities.

Addressing the youth forum earlier, António Guterres apologised for the “lack of attention given to the oceans by older generations and political decision-makers” – stressing that slowly improvements are being made.

Older generations have been responsible for the degradation of the condition of the world’s seas, and for being slow or even “unwilling to recognise that conditions are deteriorating at sea.

Slowly, “we are working towards rehabilitating the oceans, saving biodiversity and stopping climate change”, he stressed.

Today’s youth “has inherited a planet in danger and will have to do everything necessary to revert political and economic decisions and behaviours (…) I wish you the best success”, he told his audience, adding “success which unfortunately my generation has not managed to attain”.

Guterres’ speech was not without criticism for “certain economic leaders” (particularly those in the fossil fuel industry) who “only give value to their shareholders”.

It will be interesting to see what comes out of this conference given that Portugal has been bidding for a much larger slice of territorial waters, on the basis of the ‘wealth’ this extended continental shelf could bring the nation, and President Marcelo has since tasked an expert to study matters of the sea, and how best they should be managed.

From Carcavelos beach to Lisbon

The Navy and Ministry for the Environment and Climate Action have today signed protocols with the Parley for the Oceans foundation to “defend diversity on land and sea, and find solutions”.

Naval chief Henrique Gouveia e Melo has been talking about the need once more for the country to focus on the sea. He told Lusa yesterday in the run-up to the Oceans Conference opening tomorrow that he has “absolute certainty that this century will see sea colonies; people living permanently at sea; cities in the sea – which will change human geography and human relations.

“Portugal, being a small country on the southeast of the european continent, far from the main industrial and economic centres, in a Europe that is extending east, has to look at its strategic relevance and understand what its role in the world is, and how it can prosper in this historic and geographic framework”.

It is very relevant that this conference is taking place in Portugal, he told Lusa, because it shows Portugal is a country focused on the oceans, and therefore a ‘maritime power’, just as its history indicates.