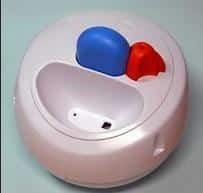 A NEW home fertility test for men known as Fertell, launched in the UK last week, has been widely covered in the Portuguese national press, with reports even quoting the website address for Boots the Chemist in order for interested parties in Portugal to purchase it online. In fact, a double page was used to report the UK’s new medical development in Portugal’s popular Correio da Manhã newspaper.

Fertell is the first home fertility test for men to become available in the world and has been developed by the Faculty of Medicine at the University of Birmingham. In little more than an hour, men can find out if they are suffering from an infertility problem.

Infertility is reportedly on the increase due to stress, poor diet and the excessive amount of time men spend working in a sedentary position.

The Fertell male fertility test is easy to use and measures sperm quality. Intended for home use, it measures the concentration of sperm in the ejaculate that can swim (known as motile sperm), a key indicator of sperm quality. It gives a result in as little as 75 minutes and, one of its key selling points is that, “being designed for use at home, it avoids the stress and perceived embarrassment associated with a doctor’s visit”.

The Fertell male fertility test includes a female fertility test which is an easy to use, one-step test that measures ovarian reserve (the quantity of healthy eggs remaining) by diagnosing key hormone levels in the urine. It operates in a similar way to a home pregnancy test, using a similar looking device and offers a result within 30 minutes.

During the development of the Fertell male fertility test, which lasted a total of seven years, the research team analysed more than 3,000 individual sperm samples.

The male test works by forcing sperm to swim through a barrier, which mimics the female cervix. The device then measures the number of sperm, which swim beyond this point. By including a barrier, the device is able to accurately measure the concentration of active sperm, which is a key indicator of male fertility. If a high enough level of sperm is present in the sample, a red line indicates a positive test result.

To measure the accuracy of the test, samples from 150 subjects were looked at and the test provided an accurate result in 95 per cent of cases, whether the original sample showed a negative or positive test result.

Professor Chris Barratt from the University of Birmingham Medical School, who led the research, says: “The Fertell test should provide couples who are trying to conceive with an early warning. At the moment, many couples are advised to wait for around a year before seeking medical attention, but age can have a very significant negative impact on fertility, so having reliable information at an early stage can be a huge advantage. The test is not a substitute for seeing a specialist and, if the test is positive, expert advice will need to be sought. Even if the test proves negative, regular examinations should be undertaken.”

At the moment, the Fertell kit, priced at 116 euros, is only available in the UK and is sold at Boots in store or online from www.boots.com

There is no date at present for its release on the market in Portugal, but there are plans to expand its distribution base to the rest of Europe. It is due to be launched in Ireland in April and the US in September this year.