The Algarve’s charming village of Carvoeiro was the main setting for a three-part news report this week by the UK’s Channel 5 News about the return of British tourists to Portugal.

Led by reporter Peter Lane, the first video was filmed aboard a Manchester-Faro flight and explored why Brits are choosing the Algarve for their holiday.

“We just enjoy socialising, and it has more to do with being able to sit, enjoy a drink, watch the world go by and enjoy a bit of sun,” said Lisa Thompson.

For Alison Spink, it was about sunshine and safety.

“Abroad felt safer than the UK basically, because we know that in a lot of respects rules are stricter there than they are in the UK. People adhere to them,” she told the news channel.

But for others like 82-year-old John Wilcock, it is all about “the adventure” of travelling.

The report also focused on the added costs of travelling at the moment due to the need to undergo PCR testing to be able to fly.

“If you can get the economy moving again, it will be absolutely brilliant for everyone. It’s a breath of fresh air,” he added.

Also interviewed was João Jesus, general manager at Tivoli Carvoeiro Hotel, where the “first trickle” of customers are arriving. They are fully booked for the end of this month, however, and around 70% of guests will be Brits.

“It almost sounds like the start of a new life,” said the hotel manager, adding that the return of British holidaymakers is “essential to make this year work”.

Sitting outside Smiler’s Bar near the beach square in Carvoeiro, holidaymakers Jordan and Alan had only booked their flights last Friday.

“When we saw that we could come here, we thought ’20-pound flights? It would be rude not to!’,” they told 5 News, adding that it felt “amazing being here”.

Robert and Geraldine Wilkinson from Smiler’s Bar stressed just how important tourists are to the Algarve.

“In the Algarve, the main work is tourism. And if there is no tourism, then you’ve got probably 90% of people out of work,” said Robert.

“So, we need tourism in this country, and we need the British to come over,” added Geraldine.

The third and last video focused on the lives of British expats living in Portugal, from those who are still waiting on their post-Brexit residence paperwork to those who have been unable to visit their families.

“We’re just in a state of limbo, with Brexit and us not knowing our position and then obviously the pandemic hit,” said Matthew Watton, manager of the Carvoeiro Clube de Ténis.

Meanwhile, Zoie Hawker from Fine & Country Carvoeiro also provided some insight into how the pandemic and Brexit have affected the property sector.

“Brits can no longer stay here for six months, they can only do the 90 days every 180 days, so we’ve seen quite an increase in those people putting their property on the market,” Zoie said.

“But that has been replaced with people moving over and the younger demographic who are planning to come, work here remotely and then perhaps go back to the UK to have the odd appointment maybe once a month,” she added.

Open Media Group founder and CEO, Bruce Hawker, publisher of the Resident, was also interviewed about how the pandemic has prevented him from meeting his two grandchildren.

“It’s really been pulling at our heartstrings. I mean, our oldest grandson doesn’t know us. We’re just the people in the computer,” he said.

Feeling further away than ever from his family members who live abroad, Bruce explained that he and his wife would normally be on the first flight over: “To not be able to do that, to support them and be with them, it’s been heartbreaking.” But with flights now booked, a family reunion is “in the cards”.

Channel 5’s tour of the Algarve ended with a meal at Rei das Praias beach restaurant at Praia dos Caneiros (Ferragudo) which was greatly enjoyed by the crew.

The three videos can be found on Channel 5’s YouTube page (below). 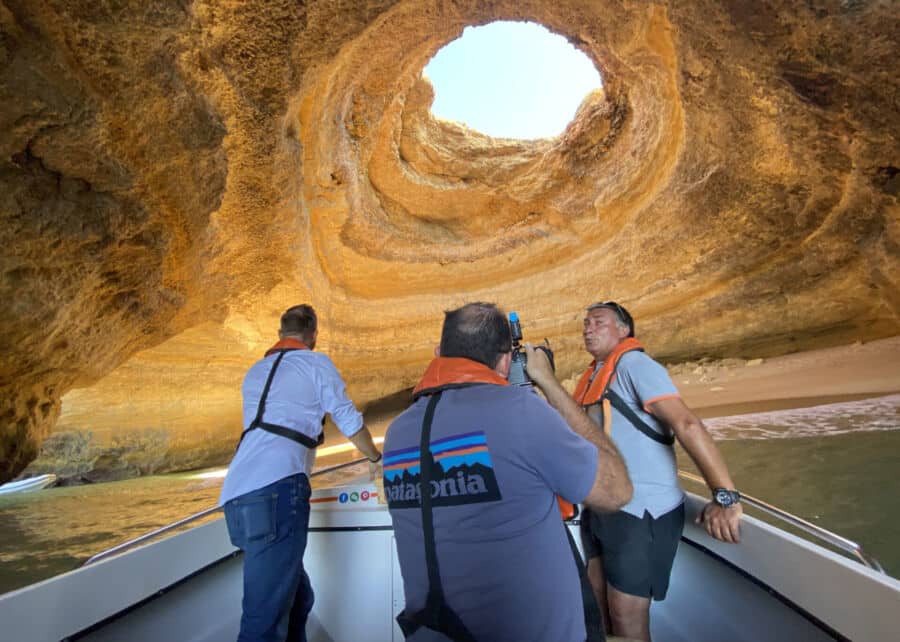