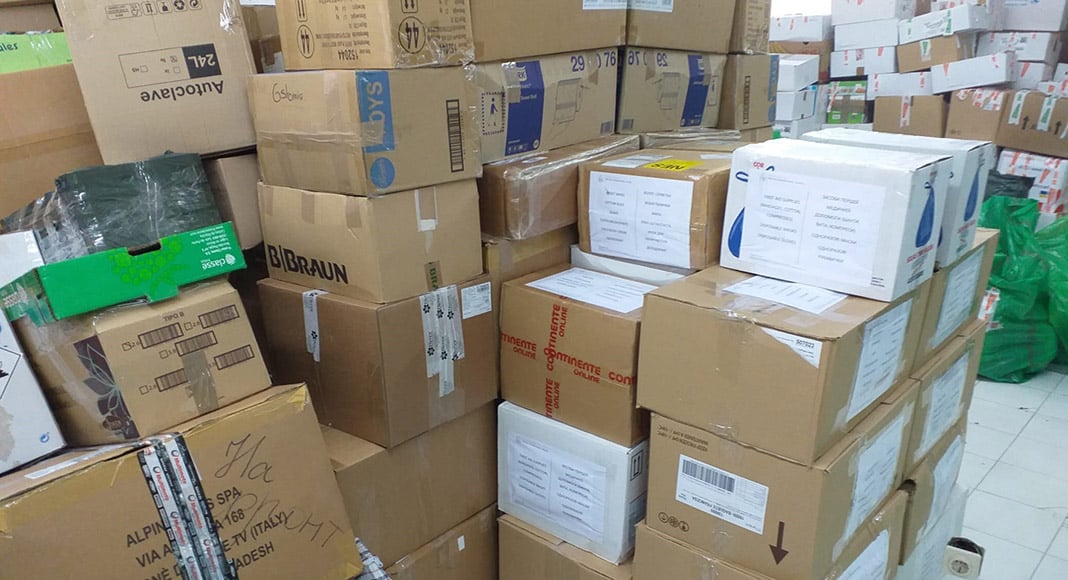 The Algarve Association of Ukrainians has taken on a major role since the start of Russia’s invasion of Ukraine, having set up a base in Faro where most donations from across the region are stored before being loaded into trucks to be taken to Poland and then to Ukraine.

Igor Korbelyak, the association’s president, has been working tirelessly for weeks to coordinate the process and ensure his fellow Ukrainian citizens are receiving all the assistance they can get.

“What’s happening (in Ukraine) is cruel. People are just trying to survive. There are cities that are running out of food because production is stopped,” Igor told the Resident.

This is why it is so important for European countries to continue helping with donations, he added.

In the Algarve, several collection points for donations have been set up – one of them being the Resident office in Lagoa.

Donations are then transported to the Algarve Association of Ukrainians base in Faro, a former gym which has kindly been provided to the association by Marlene Rodrigues.

From there, the items are sorted and then loaded onto trucks which are driven to Poland. The items are unloaded and then taken by other trucks managed by Ukrainian municipalities and the Ukrainian Ministry of Defence to areas in need.

As Igor told us, some parts of Ukraine have become inaccessible due to the advances of Russian troops.

The transportation of goods to Poland has become one of the association’s main concerns, as the costs of transportation of the first trucks were covered by “Ukrainian compatriots” who cannot bear the expenses for much longer.

Thus, a campaign to raise funds has been launched by the association (for more information visit ‘Associação dos Ucranianos no Algarve’ on Facebook). Money raised will also be used to help arriving refugees, such as mothers who cannot begin working immediately either due to the physical and mental toll of the war or because they have not yet been able to find a day-care centre for their children.

Igor said he and his fellow Ukrainian citizens have been touched by the support shown so far “not only by people in the Algarve and Portugal but all over Europe.”

“We are very grateful to the people who help us, it is precious and we try to thank everyone we can,” the association president said.

For now, the main needs continue to be medicine and non-perishable food that does not require preparation; in other words, dry foods like biscuits or canned goods.

“We have to realise that the people who are receiving the food likely do not have electricity or means to prepare the food,” Igor pointed out.

He also asks that people avoid donating food in fragile containers such as glass.

“We have not been loading glass containers onto the trucks because they are too fragile and could break on the way,” Igor explained, adding that these items are instead kept at the base where they will be delivered to those in need locally.

He added that the association is working together with CRAIM – a local division of the High Commission for Migration – to make sure the items reach those who need them the most.

The Resident overwhelmed by support

The Resident’s office in Lagoa is a collection point for the Algarve Association of Ukrainians and has received a massive amount of donations in the past weeks. So far, our company van has already delivered three vanloads of donations to the association’s base in Faro.

Nobel Algarve British International School in Lagoa made a substantial delivery last week, with donations coming from the entire school community. Head of School Abigail Lewis said the school has already started collecting more donations and will keep the initiative going for as long as it is needed.

Meanwhile, private chefs Filipe Silva and Tomé Cardoso organised a fundraising dinner at Rolha Wine Bar in Porches (Lagoa) on March 9. Attended by 20 people, the event raised around €1,000 which was used to purchase everything from food to medicine, and pet food. All items were delivered to the Resident office.

Our offices are open weekdays from 9am to 1pm and 2pm to 5pm.