As the saying goes, “There are three sides to every story: your side, my side, and the truth.”

No one has to be lying. They may just have different viewpoints, but that’s not what’s going on in Ukraine.

Stories told in the past by Donald Trump and Boris Johnson were obvious examples of inexcusable lying. The main focus now, of course, is on the truthfulness, or otherwise, of Vladimir Putin.

Putin said repeatedly before February 24 that he was not going to order an invasion of Ukraine. Amassing troops and heavy armaments along Ukraine’s border was “a military exercise”, he insisted. He described the West’s concern about a possible attack as “hysteria”.

Russia’s Foreign Minister Sergei Lavrov claimed two weeks into the invasion that his country “did not attack” Ukraine.

Who are they kidding with this doublespeak? In typical Orwellian fashion, the Kremlin has forbidden the people of Russia even to mention the words “invasion” or “war” in connection with Ukraine. To publicly protest against it is an offence punishable by imprisonment. In a startling few seconds during a live news broadcast on Russian state media this week, a young woman held up a sign that read: “Stop the war. Don’t believe propaganda. They’re lying to you.”

The Kremlin has shut down as far as possible any news infiltrating from the West. Meanwhile, the West is doing what it can to continue making reliable news available to the citizens in Russia. As well as the war on the ground, the news on war involves much disinformation, propaganda, cyber attacks and internet blackouts.

In contrast to what’s going on inside Russia, freedom of the press, freedom of expression and freedom of information are constitutionally guaranteed in Portugal. Internet access is not restricted. Against this background, an opinion poll carried out by Politico in eight European countries last month showed the Portuguese as the most supportive of an EU-coordinated defence of Ukraine, with 78% of respondents in favour of this.

Portugal is probably China’s closest contact in the EU, but China’s attitude to the war in Ukraine is obscure, all the more so because it is a distraction from Beijing’s Paralympic Winter Games. While China is regarded as a key strategic partner of Russia and a powerful opponent of the United States, it also has strong ties with Ukraine. It remains to be seen how China will react physically or informatively to the extreme violence in Ukraine in the days and weeks ahead.

Meanwhile, newsrooms and individual journalists across the Western world are making use of technical ‘open-source intelligence’ methods to fact check information. The aim is to verify or debunk questionable statements or images before broadcasting or publishing controversial stories.

It is thought Russian manipulation is being used to blame others for carrying out atrocities such as the destruction of hospitals and direct targeting of civilians, including children, which Putin denies. ‘Open-source’ investigations will be crucial in identifying those to be held to account in future international court cases about war crimes against humanity.

One person above all others who has never minced his words untruthfully since this war began is Ukraine’s President Volodymyr Zelenskyy. He has pleaded with the West to create a “no fly zone” to stop Russian air strikes against his people, but NATO has repeatedly refused on the grounds that it would further provoke Putin and perhaps escalate the war into a nuclear disaster. There is nothing fake about the attitudes of either President Zelenskyy or NATO. No one is lying here. They just have different points of view.

In referring to the crass dishonesty emerging from the Ukraine crisis, Britain’s Poet Laureate, Simon Armitage, has written: “False news is news with the pity edited out.” This seems most appropriate in the context of Putin’s claim that he had ordered Russia’s military to put its nuclear deterrence forces on “high alert”, implying he was prepared to use weapons of mass destruction if necessary to bring Ukraine to its knees.

More recently, both the United States and Russia have accused each other of making threats about the use of biological or chemical weapons, but no one seems to be sure if this is a serious possibility or more doublespeak to create further doubt and fear within the enemy.

Western media outlets are not always completely neutral or on the same political wavelengths. In the United States, Fox News is to the right of CNN. In the UK, The Guardian is to the left of the Daily Telegraph. Among the other reputable outlets reporting on the war directly from Ukraine and available to people living in Portugal are the BBC and Sky News.

Several journalists, including Sky News’ chief correspondent Stuart Ramsay, have been targeted in the Ukraine. Seriously wounded when more than 1,000 bullets shattered the car in which he and his TV crew were travelling, Ramsay was brought back to the UK with the following video that gives a special insight into the sort of risks dedicated journalists are prepared to take in order to report the truth. 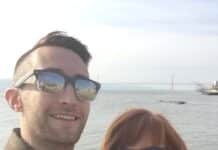