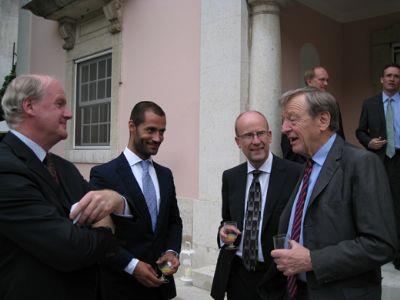 A delegation of British MPs was in Lisbon last week at the invitation of the United Kingdom – Portugal Friendship Group.

The MPs, including Lord Alf Dubs, Chairman of the All-Part Parliamentary Group for Portugal and former Chairman of the Labour Party in the House of Lords, followed a visit by a group of Portuguese parliamentary deputies to London last year to celebrate the 200th anniversary of the defeat of Napoleon’s French forces under General Jean-Andoche Junot by Arthur Wellesley, Duke of Wellington, in August 1808 at the Battle of Vimeiro.

As part of the visit, the MPs went to the Leonel Trindade Museum in Torres Vedras, which houses an important collection and display about the fighting in the area during the Peninsular Wars of the Napoleonic campaign, and visited Monte Socorro which had been the Duke of Wellington’s main signalling station.

Much of the event and itinerary was organised by Clive Gilbert of the British Historical Society while at a cocktail at the British Ambassador’s Residence in Lisbon, HMA Alex Ellis, stressed the importance of the long-standing British-Portuguese alliance, the Treaty of Windsor being one of the oldest unbroken treaties in the world.

The MPs also went on to visit the Alqueidão Fort and Great Redoubt which are currently being restored, as well as Wellington’s HQ at Pero Negro and Beresford’s at Casal Cochim.

The party then saw the Monument to the Lines of Torres Vedras, Lieutenant-Colonel Sir Richard Fletcher, at Alhandra, the remains of the Second Line and Cotovios, as well as Redoubt 120 from where a warning shot was fired at Massena.

The Lines of Torres Vedras were forts built in secrecy by Portuguese army engineers and workers between 1809 and 1810 at a cost of £100,000 near Torres Vedras to defend Lisbon and stop Marshal André Masséna’s 1810 offensive.