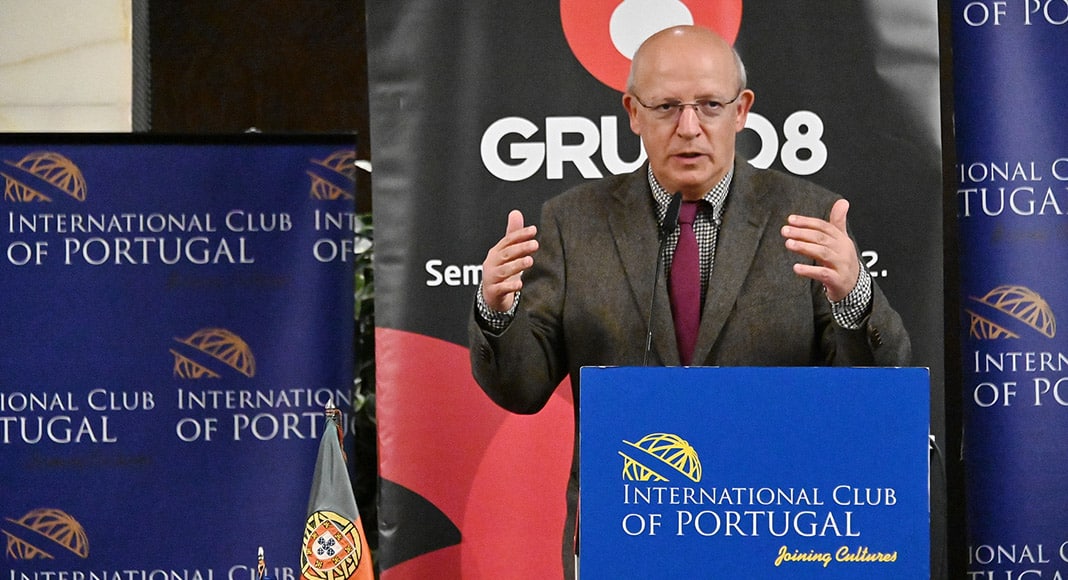 Portugal’s Minister of Foreign Affairs, Augusto Santos Silva, said that redefining economic relations with the United Kingdom post-Brexit and closer economic ties with the United States were among five opportunities for Portugal this year.

Addressing more than 200 people at an event organised by the International Club of Portugal at the Sheraton Hotel in Lisbon recently, the minister said that he was optimistic regarding US relations and an eventual trade deal with the European Union.

Explaining the backdrop, Augusto Santos Silva said that Portugal had benefitted from a very favourable macroeconomic cycle and policy pursued by the European Central Bank, enabling it to overcome a particularly serious economic crisis between 2010-2014 when the international financial crisis combined with the European sovereign debt crisis.

“We have succeeded in maintaining a cycle of economic growth that has not only enabled us to grow above the European Union average but has allowed us, at the same time, to leverage on different economic drivers from an internal-demand point of view and from the point of view of inward investment and exports,” the minister said.

Augusto Santos Silva also pointed out that all available indicators suggest that the Portuguese economy at a macro level had succeeded in substantially improving its main pillars of the economy and finances, which had enabled Portugal to cope well in the current economic downturn in the eurozone and be prepared for some risks that currently overshadowed the international panorama.

The minister also stressed that Portugal had achieved economic growth that had consistently placed it above the eurozone average.

In addition to economic growth, Augusto Santos Silva emphasised the fact that Portugal had succeeded in overcoming the years of crisis (2010-2014) without having suffered a political or social meltdown, instead achieving political consensus and stability, which was a competitive advantage on a European and international scale in terms of attracting overseas investment.

From this basis, Augusto Santos Silva sees two advantages: leveraging on the current investment cycle (GDP growth 2.2%) and the quality of that investment in terms of attracting companies and creating employment.

The second opportunity is the set of institutional and political circumstances Portugal currently enjoys.

“When large international investors take decisions on whether to invest in Portugal or not, this institutional and political stability goes in our favour, particularly labour legislation, and are very important variables,” he said.

China, US and UK
Augusto Santos Silva also had a positive view of international relations, especially with the United States. Trade between Portugal and the US has shot up dramatically over the past two years.

“Over the past few years, we have endured a series of misconceptions in our relationship as Europeans with the United States” (a nod to the difficult tug-of-war with the US over Chinese investments in Portugal and the entry of Huawei to construct part of Portugal’s 5G network which the US has been boldly opposed to).

“Today, I think that the two partners (European Union and United States) have a greater awareness of the importance of rapidly reaching an agreement, which will at least put the brakes on an escalation (meaning a trade war between the EU and US) from a trade point of view and instead manage to reach a trade agreement.”
The background to this, and not referred to at the lunch, is that European lawmakers have warned the US that civil aviation aircraft construction rows threaten growth and relations between the two blocks as US tariffs of between 10% and 25% are scheduled to take effect on billions of dollars-worth of European exports.

The World Trade Organisation sanctioned the tariffs as a means of compensation for subsidies granted by European governments to the plane maker Airbus.

Portugal’s Finance Minister, Mário Centeno, who steers the regular meetings of his eurozone counterparts, has said that the uncertainty over trade and the threat of fresh tariffs are risks to the economic order – threats that are political in nature.

“They are not based on the fundamentals of our economy,” he told CNBC in an interview late last year, adding “They do not respond to any sort of imbalances that we really have in the global economy.”

Nevertheless and despite continuing tensions, according to the United States Census Bureau, trade between the US and Portugal increased in both 2018 and 2019 in Portugal’s favour (exports to US – US$3.8 billion) and US imports to Portugal (US$1.7 billion) while in 2018 Portuguese exports stood at US$3.8 billion and imports from the US at US$1.5 billion.

Canada and India
Augusto Santos Silva pointed to the success of Portuguese exports to Canada which had grown in both 2018 and 2019 on the back of a trade agreement between the EU and Canada.

The minister also said that a long-standing situation that had been blocking commercial agreements with India also showed signs of thawing, which was important given that India was a market of over 300 million people.

Important for Europe was to open up Chinese markets to the European economy which were still quite protected and to better protect European interests: technological, economic and security.

“Portugal, given its historic ties to China, imports far more than it exports, in part because of the trade barriers that are placed on Portugal’s products and there is an opportunity to improve this trade imbalance,” said the minister.

Brexit – it’s done!
On the other hand, Augusto Santos Silva said that although “Brexit has happened”, it presents “another opportunity” taking into account that he hoped “a trade deal between the EU and UK would be zero quotas and zero tariffs but also zero dumping”.

Following Brexit, the UK is free to strike new trade deals for selling goods and services around the world, but the government will now have to negotiate a new trade agreement with the EU, and Portugal, as part of the EU, will have to abide by EU rules. The UK is Portugal’s fourth most important client state within the EU.

UK exports to Portugal did not place her in the top 15 UK export countries worldwide, it being behind Poland’s 1.5% of total exports. The value of UK exports of trade goods to Portugal stood at US$2 billion in 2018. Portugal is the UK’s 31st client in the world ranking and its 27th supplier, according to the International Trade Centre.

According to numbers from Portugal’s National Statistics Institute (INE) to November 2019, the trade balance was positive in Portugal’s favour by €1.4 billion.

And expressing a desire for something that is far from certain as EU-UK divorce and trade negotiations begin, he said it was vital that the “UK strikes an agreement with the EU whatever the cost”, without breaking away or punishing the UK by being revengeful.

“We have divorced the UK to begin a new relationship. It’s a bit strange and rather original, but that’s what it is,” he said.

“Here, too, is an opportunity because, over the past two and a half years, instead of seeing a sharp fall in British tourists to Portugal and Portuguese exports to the UK, exports to the UK in 2017 and 2018 have been ever upward and we have created the conditions for the bilateral relationship to flourish,” Augusto Santos Silva added.

Mercosul
Augusto Santos Silva stressed, too, that the agreement on reducing tariffs signed with the Mercosul countries (Southern Common Market of Argentina, Brazil, Paraguay, Uruguay and associate countries like Chile and Bolivia) last year was of absolute vital interest for Portugal, strategically, politically and economically, particularly Portuguese exports to Brazil which represent three-quarters of all Portuguese exports to Mercosul countries.