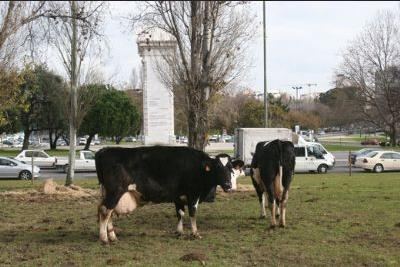 When I received a couple of phone calls from friends informing me that there were cows on Lisbon’s second busiest roundabout, I imagined they must be of the fibreglass variety as seen a few years ago in the Lisbon Cow Parade.

“No, 10 real dairy cows are right in the middle of Praça de Espanha,” I was informed.

It wasn’t April Fools Day so it must, very likely, be a hoax, I thought, but just to make sure, I headed off full of doubts with camera in hand to photograph the bovine creatures.

And sure enough, within two pens right in the middle of Lisbon’s most polluted and traffic jammed roundabout were 10 cows – several black and white, a couple of tan and one completely white, happily munching away on bails of straw without paying a blind bit of attention to the bemused motorists stuck at red traffic lights.

The cows were put there last week to promote tourism in the Azores, as part of the annual Lisbon Tourism Fair, BTL, but the plan backfired with animal rights groups. Animal rights association Animal called it a “sick and cruel publicity campaign that was frankly absurd”. Miguel Moutinho of the association said: “It’s plainly ridiculous that these animals should be subject to the stress and pollution caused by thousands of vehicles.”

Yet tourism consultants Brand Builders could not see what all the moo-ha was about. CEO Paulo Moura Mesquita said: “Everything has been done to ensure that the welfare of the animals has been taken into account. They are fed regularly with hay, cattle meal with vitamins and water, not to mention the natural grass.”

The company also said that all legal requirements and licences were sought, including permission from Lisbon Câmara.

The cows weren’t actually from the Azores, although they were the same species and variety, and didn’t seem too perturbed when the Algarve Resident went along to see what all the fuss was about.