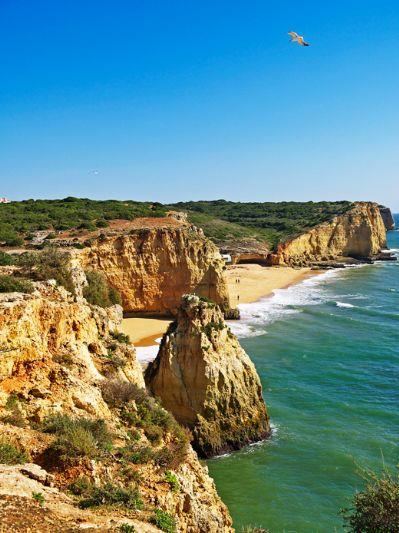 Two British tourists have needed medical attention in the last two weeks after sustaining injuries by falling on rocks at Algarve beaches.

Both cases involved people out casually walking with family.

On the Carnival public holiday, a woman sustained a fractured leg after falling from a cliff at Praia do Vau near to Portimão. The 57-year old, who was not named by authorities, was taken to the Barlavento Hospital in Portimão where she was treated at the orthopaedic unit.

Then on Sunday, a 73-year old man fell on rocks at Praia de Inatel in Albufeira where he had been walking over a difficult and rocky area.

Commandant Marques Pereira, Captain of the Port of Portimão, told the Algarve Resident: “An alert was raised just before midday. The Maritime Police were at the scene within 10 minutes and found the man recovering in a nearby cafe.

“He had fallen on a difficult patch of rock and had a head injury. He was then taken by local emergency services to Faro hospital.”

In a statement sent to the Algarve Resident, Faro hospital confirmed that the man had received treatment on Sunday, March 1 and left of his own accord the same day.

Commandant Marques Pereira advises all visitors to the beaches in the region to exercise caution and to be responsible for their own safety while exploring the coastline.

“There is an associated risk and as so everyone should exercise care and attention and always use appropriate footwear,” he said.