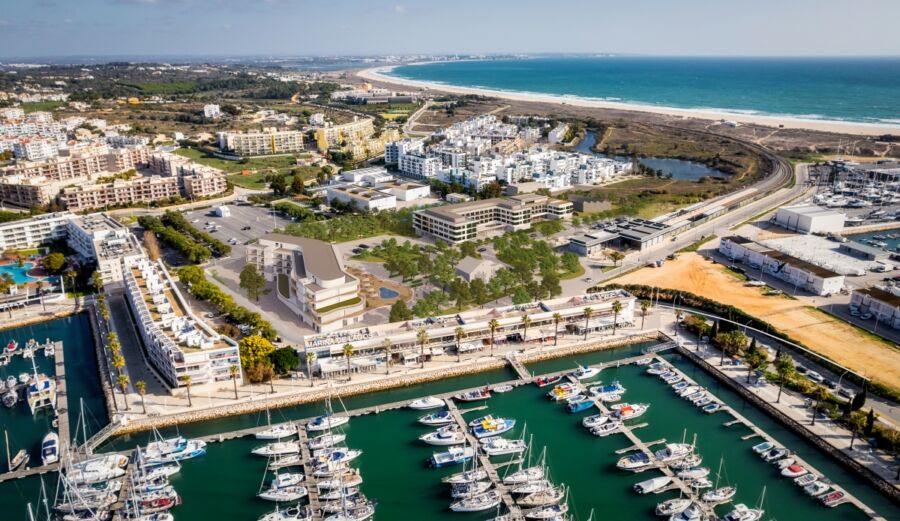 Hotels are due to open in summer of 2024

Mercan Properties Group and Hilton have announced a €107.8 million project to build two new hotels just a stone’s throw away from Lagos Marina.

The two hotels – entitled ‘Lagos Marina Hotel, Curio Collection by Hilton’ and ‘Hilton Garden Inn Lagos’ – are expected to open in the summer of 2024, according to a joint statement released this week.

The project is expected to create around 150 jobs during its construction phase and a further 200 during its operation.

With a 23,000sqm area of gross construction, the venture is described as a “unique project in this Algarvian city for integrating two hotels with distinct concepts.”

According to the developers, Lagos Marina Hotel, Curio Collection by Hilton will have “189 high-comfort rooms, distributed among four floors in a total gross area of 14,776sqm.”

It will also feature a restaurant and two bars, one of which will be found on the “sprawling rooftop terrace complete with infinity pool”.

“Boasting a second pool on the ground floor, guests will be able to swim or lounge by either pool before sampling the hotel’s spa and fitness facilities,” the developers say.

Meanwhile, Hilton Garden Inn Lagos will have 90 rooms, 27 of which will be converted into suites with kitchenettes, in a total gross area of 7,505sqm.

Guests will have have at their disposal a bar, restaurant and a 24-hour self-service shop, ensuring they are able “to cater to every need through the day and night.”

“Fitness facilities and an outdoor pool mean guests can work out or relax by the water, and the hotel’s ideal location invites exploration of Marina de Lagos and the rest of the city,” the developers say.

They add that both hotels will “blend seamlessly into their surroundings through an architectural composition with delicate and careful lines, thought out in detail with the comfort and well-being of an exclusive lifestyle in mind.”

“With Lagos’ beautiful outdoors in mind, rooms and restaurants alike will be designed with terraces, sunken gardens and balconies, so guests can enjoy the warm Algarvian weather as well as views of the Atlantic,” the statement reads.

“Both hotels also offer meeting room spaces, as well as more than 160 car parking spaces between the two hotels,” it adds.

“The agreement now signed with Hilton is a proof of the development and interest that the city of Lagos has generated, increasingly asserting itself as a distinctive place, able to combine superb natural landscapes with a rich historical and cultural heritage,” says Jordi Vilanova, President of Mercan Properties Group.

He adds: “This project also represents a winning bet for Mercan Properties Group, very much in line with our values, as we give back to the city a place of comfort and well-being, capable of further boosting the marina and all the services and spaces around it”.

Hilton is also delighted to build its presence in the “incredibly popular Algarve.”

“We are excited to partner with Mercan Properties Group to make our debut in Lagos,” says Carlos Miro, Hilton’s managing director of development in Spain & Portugal.

“Dramatic cliff faces, picturesque beaches and its vibrant culture make this highly sought-after tourist destination an ideal location for our Curio Collection by Hilton and Hilton Garden Inn brands. This announcement solidifies our commitment to Portugal as a key strategic market for Hilton, with plans to more than double our portfolio in the coming years,” Miro adds.

What will become of Lagos’ historic railway buildings?

After the project was announced, the Resident contacted the developers to ask whether Lagos’ old railway station and railway museum – which from the promotional photos seemed to encompass the two historic buildings – would be incorporated into the project.

However, a source has confirmed that the buildings are not included in the developer’s plans.

While Lagos Council signed a protocol in July with the National Railway Museum Foundation to share the management of the town’s old railway museum – and hopefully open it up to the population – the fate of the old railway station is more uncertain.

The old station, which turned 100 earlier this year, has been put up for sale over the years but remains a rundown relic just a few metres away from the local marina.

(Article updated on November 22, 22:01, after developers’ answer regarding railway buildings)