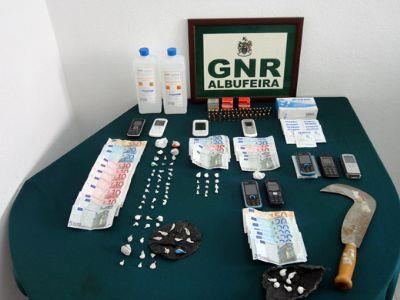 Two drug dealers, described as the main suppliers of cocaine and heroin in Albufeira, along with eight other individuals were arrested in a major drug bust in the popular tourist area of Montechoro on July 5.

A two-year police investigation, which involved members of the GNR, SEF, ASAE and Finanças, led to the arrest of the suspects, aged between 25 and 50 and of Cape Verdean nationality, who were operating from two restaurants within a fun park that served as a cover.

Investigation began in 2010 after complaints from local residents who claimed that drug trafficking was taking place in this popular area of Montechoro which offers resorts, hotels, restaurants and bars.

A spokesman from the GNR told the Algarve Resident: “Suspicious activity had been detected in a leisure facility in Montechoro in mid-2010. However at the beginning of this year activity increased significantly which led to a formal investigation.

“Several individuals were found to be selling drugs, such as cocaine and heroin, not only from the two restaurants within the leisure park but also on the streets in full view of passers-by.”

The GNR official added that drugs had also been found hidden in flower pots and planters, under stones and soil, and even under mats at the entrance to the establishments.

In possession of arrest and search warrants, 50 GNR officers raided the area and detained the 10 suspects, six for drug trafficking, one for being in possession of a machete and 80 bullets, and three for illegal immigration.

Six drug users of Portuguese nationality were also identified, with police seizing 10 doses of heroin and 20 doses of cocaine that had been purchased from the dealers.

Among the items seized by the authorities were 330 doses of cocaine, 90 doses of heroin, €500 in cash, a machete and nine mobile phones.