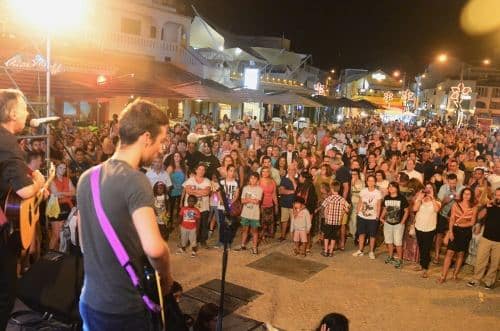 Sir Cliff brought with him his album Soulicious, which was released on October 10 last year, four days before his 71st birthday.

During the two hours Sir Cliff was at the studio, Owen played some tracks from the Soulicious album, which featured duets with some of the greatest singing stars of all time. It was impresario David Gest who arranged for the duets to be sung with stars like Peabo Bryson, Roberta Flack, Dennis Edwards and the sisters Freda and Scherrie Payne.

Sir Cliff and Kiss Fm’s Owen chose which tracks to play from the album in response to listeners’ questions and requests. Listeners were invited to ask Sir Cliff any question they liked. The telephone lines lit up and questions galore arrived by email, Facebook and text messages.

At one time, nearly 700 people were following on Facebook and the website which provided a live sound link to the programme crashed for a few minutes.

Questions asked ranged from what was his first car (a Sunbeam Rapier), how good was his Portuguese, the story behind his song The Next Time and whether he had been picked up on Owen’s motorbike.

Owen fortunately had able assistance from friend Joan Richens (a lifelong fan of Sir Cliff), who took Sir Cliff to the studio and returned him home again – so no motorbike ride was needed!

There was also a question from someone listening on Facebook in Australia who asked when he was next going to Australia.

Sir Cliff revealed that there was a good chance he would be performing in Australia in February next year, although arrangements were still in their early stages. He also mentioned that he would most likely be meeting up with his old friend Hank Marvin from the Shadows, who now lives in Western Australia.

Another listener asked Sir Cliff how he kept his six- pack as she wanted to tell her husband. His reply was that he keeps to a sensible diet and plays a lot of tennis. The question of retirement also came up, to which Sir Cliff replied that although he was trying to slow down, he was only too happy to keep going while people bought his albums and went to his concerts.

It was a busy morning at the studio, as Berenice Scott, daughter of Robin Scott of the 70s group M, arrived to promote her first debut EP The Outwood Sessions, which was very well received.

Sandra Howarth put her usual Sunday morning organisational skills into full effect by sorting out all messages and Captain Peter Cain was on hand to do his regular Sunday Morning ‘Seawatch’ feature and keep everyone in check. Also helping out were Dr. John McKean and Raoul Ruiz Martinez, the radio investment and financial expert.

All in all, a great morning for Kiss Fm listeners.