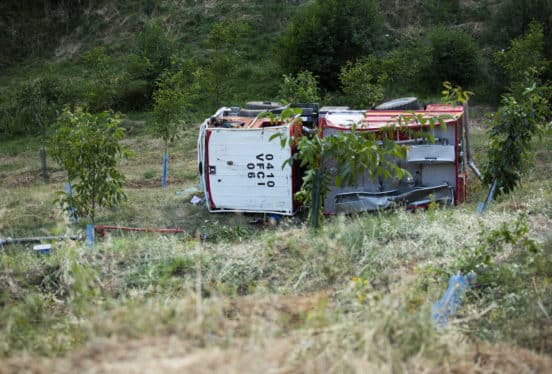 Two firefighters died yesterday evening after the fire engine they were travelling in careered off the road, overturning down a slope.

Three colleagues also travelling in the vehicle were injured, one seriously.

The fatalities have been named as 37-year-old Neuza Guedes and 22-year-old Carlos Morais.

Both were attached to the Vinhais fire station in Bragança district.

The accident happened in the context of a rural fire in the area of Travanca.

There appear not to have been any other vehicles involved.

Minister for Interior Administration Eduardo Cabrita has conveyed his “profound sadness” over the tragedy, sending his “wishes for a full recovery” to the three injured colleagues.

He expressed his “gratitude at this moment of consternation for all Portuguese people” for the “altruistic, professional and always selfless way in which thousands of firefighters are part of the national effort to defend the forest against fires on a daily basis”.

President Marcelo as well as the League of Portuguese Firefighters have also sent their condolences, while the ‘Bombeiros Portugueses’ Facebook page posted a eulogy ending with the sad reality that “every time a firefighter falls in service, Portugal becomes a little poorer”.