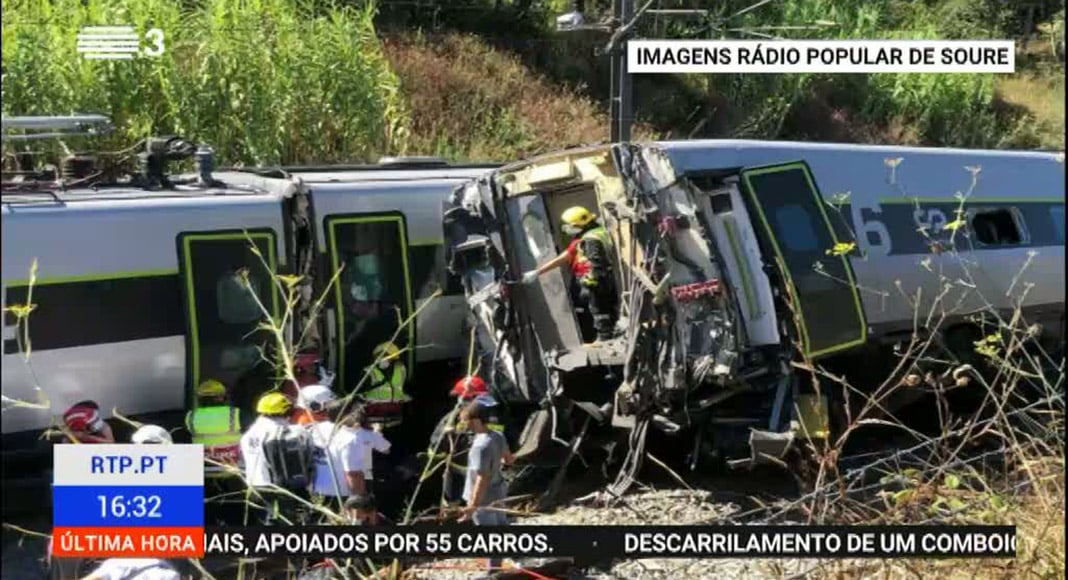 Two people are dead, six are described as seriously injured and 30 more have received slight injuries after an ‘Alfa Pendular’ high-speed train derailed near Soure, Coimbra.

The accident happened at 3.30pm.

Civil protection operatives backed by GNR and several vehicles are still at the scene.

Three passengers are described as ‘incarcerated’.

The train was travelling from Lisbon to Porto.

It had ‘just left Soure station’, thus possibly was not going at full pelt.

A campaign hospital has been mounted at the site.

Two helicopters have picked up the worst injured.

TV reports are saying the train was “practically full”, but it transpires it was carrying only 212 people.

The Mayor of Soure has said the two deaths were ‘not passengers’. They were men working in the ‘maintenance vehicle’ for IP.

For now the northern line is still completely blocked.

Television images are showing a number of people being treated in the campaign hospital.

President Marcelo has ‘lamented’ the accident – but it is clear that authorities responded within minutes of it happening.

The president is likely to visit the victims in Coimbra hospital after attending the funeral of firefighter Carlos Carvalho.

Meantime work is going on to remove debris and people’s personal possessions from the crash site as minister for infrastructures Pedro Nuno Santos has stressed: “We need to know how this happened”.

No-one programmes a journey of a high-speed train on a line that is undergoing maintenance, he said. “It doesn’t enter anyone’s head…”

Who sent the works vehicle to the line, and why was it working during the day? “All this points to enormous criminal incompetence on the part of Infraestruturas de Portugal”, Cabral de Silva told Expresso.

Wildflower meadows and their benefits