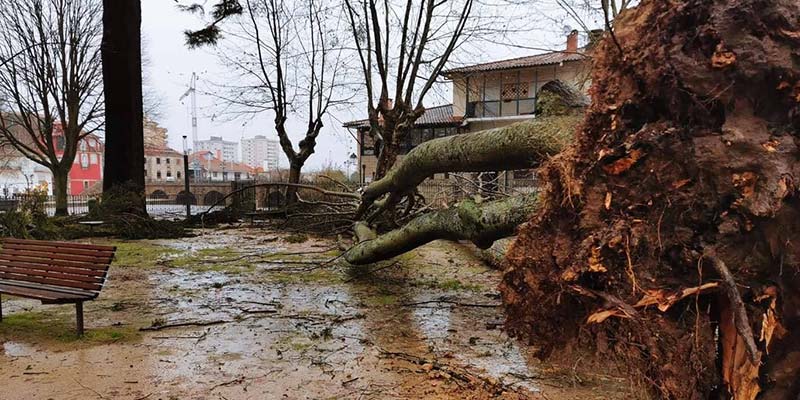 At least two people are dead, one is still reported missing and 51 have had to be evacuated from their homes as the full force of depression Elsa hit the Portuguese mainland yesterday, triggering widespread flooding and localised mudslides.

The fatalities were recorded in Montijo – where a falling tree hit a truck, killing the driver and in the north, in the borough of Castro Daire, where a house ‘collapsed’ with the force of the rain. First responders found the man inside, “already dead”.

Missing, also in Castro Daire, is the driver of a JCB who ‘disappeared’ after his vehicle was ‘taken’ by a mudslide close to the Paiva river.

As we write this text, firefighters were still looking for the man who they suspect could be ‘buried in mud’ or have been projected somehow into the bulging river.

As to rivers elsewhere, these are all flowing wildly after so many months of drought with city centres in the north and centre reporting endless incidents of flooding.

Say reports, there have been over 5,400 emergency calls to Civil Protection, while the worst affected city so far appears to have been Águeda, in the district of Aveiro, which is under huge pressure due to what local mayor Jorge Almeida calls ‘brutal discharges of water’ from the nearby Ribeiradio dam. The ‘downtown’ part of the town was under water last night, with Almeida telling reporters he ‘didn’t know how things were going to improve in the short-term’. Dozens of calls for help were coming in from people with flooded basements and authorities were doing ‘the best they could’, evacuating people where necessary.

Amarante and Chaves in the north have also been badly affected by flooding from the Tâmega river.

In Lisbon, habitual bad-weather chaos was reported in many the downtown areas – ferries were cancelled – while in Porto damages caused have been exacerbated by very strong winds.

Today (Friday) the horrors are set to continue as Elsa gives way to Fabien which promises more heavy rain and strong winds, again mostly affecting the areas of the North and Centre.

Weather authority IPMA says things will only start to improve by Sunday.

Anyone ‘out and about’ between now and then – even in the Algarve which has escaped most of the drama – should take great care as falling trees have been causing chaos up and down the country and many roads are littered with obstacles, if not blocked.