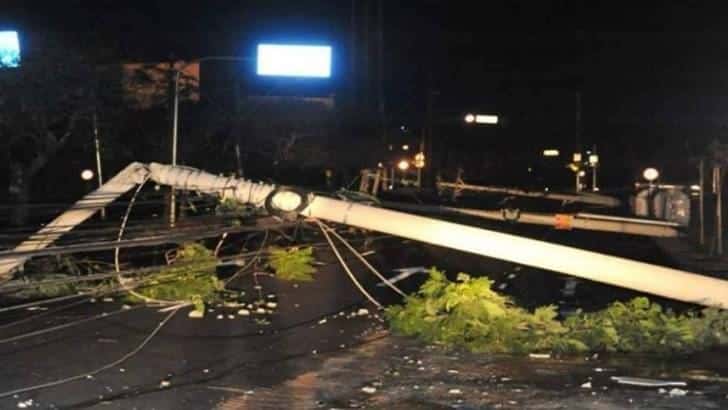 Two people are reported to have died – with 28 injured, three of them GNR agents – as authorities tot up the damages left by Hurricane Leslie’s early evening landfall across the north and centre of the country.

News of the first fatality came through on Sunday afternoon, without much explanation or identification. The victim was killed by a falling tree in Ameiro, Arazede, in the borough of Montemor-o-Novo.

The second victim, reported not long afterwards, has been described as an 81-year-old man in Armadoura, Pampilhosa da Serra.

Cause of death is again not fully explained but connected to the lack of electricity, says Lusa.

With some areas – namely the Algarve and lower Alentejo – ‘untouched’ by what was billed as the largest storm to hit Portugal in 176 years, others were hammered, with over three hundred thousand plunged into darkness as trees came down and roads were cut off.

Over 2,500 emergency calls were received with the worst affected places being Coimbra, Figueira da Foz, Montemor-o-Novo, Soure and Condeixa-a-Nova.

Damages are expected to be in the many millions of euros, with information coming in all the time of agricultural initiatives that have been badly affected.

The mayor of Coimbra told journalists last night that he will be declaring a situation of public calamity for his borough.

Fortunately, the injuries to people were mostly classified as “light” with victims receiving treatment in health units for cuts, scrapes and bruises.

At the height of last night’s ‘panic’, news stations were talking of up to 30 flights cancelled and wind speeds of up to 170 km/ hour.

The majority of people rendered ‘homeless’ were forced to flee as gusts literally tore the tiles from their roofs.

In Matosinhos, the falling of a tree blocked the Metro. Elsewhere, the A1 motorway near Pombal was shut, for the same reason.

In Lisbon ferries were halted and there was talk of closing the Ponte 25 de Abril access bridge.

But today, the situation is much calmer, with repair efforts already underway and the Civil Protection level of alert downgraded to yellow.

By coincidence, the day of the worst storm in living memory also saw the PS Socialist government locked in an extraordinary 12-hour council of ministers. When the meeting finally broke up, the executive had been quite drastically ‘remodelled’.

News on all the new ‘top faces in power’ will come tomorrow as lunchtime news today is concentrating more on the many images of Portugal’s brush with Hurricane Leslie.

Despite various sources attesting to the deaths of two people as a result of Leslie’s passage through Portugal, INEM (medical emergency institute) is refuting the information. The deaths simply occurred in areas affected by the storm, reports TVI24.

Tomorrow the true situation is likely to be properly clarified.