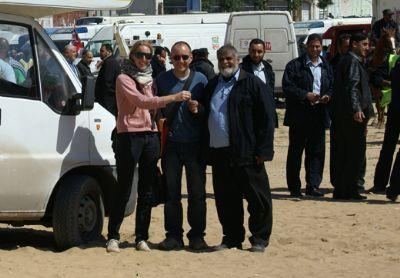 Algarve residents Grant Fitzsimmons and Linsay Carmichael have taken part in an emotional humanitarian aid convoy to the Gaza strip to deliver medical aid to some of the world’s most politically isolated people.

More than 100 vehicles left Westminster in the UK on February 14 to embark on the journey of over 5,000 miles, hoping to deliver aid as part of a humanitarian programme, Viva Palestina, launched by British MP George Galloway in January.

Linsay Carmichael told the Algarve Resident: “We were not initially involved with the convoy, but after just 48 hours on the road George Galloway contacted us and asked for our help in keeping the convoy flowing and managing the trip, so we set off from the Algarve to join them.”

Grant Fitzsimmons added: “In total there were 107 vehicles in the convoy, including a fire engine, ambulances and even a van towing a boat for the fishermen. It was a very British, eccentric journey, after all, only the British would tow a boat all the way to the Middle East!”

The convoy had more than one million pounds worth of humanitarian aid and took Grant and Linsay 23 days to complete.

“When we finally were able to get into Gaza after a lot of problems at the border, we were surprised by the optimism of the people living there.  As we toured the area they would often joke with us and enjoyed practising their English,” said Grant Fitzsimmons.

“The hotel we stayed in served us UN food aid and the swimming pool was just a huge crater from a rocket attack but the people were friendly and very appreciative of all the aid,” said Linsay.

“We saw some very harrowing sights, such as a mosque that used to be the school and medical centre for 300 orphaned children but had been destroyed by seven rockets.

“Unfortunately, because of the political situation, building materials to repair this sort of damage cannot be brought into Gaza. We know of a British citizen who has offered to donate two million pounds to rebuild this mosque but this is a place where money means nothing when there is nothing to buy.”

Despite the difficulties in the journey and the harsh realities they encountered while in Gaza, both Grant and Linsay, who live in Vila do Bispo, would do it all again.

Linsay said:”I would be on my way back there at a drop of a hat. It really puts your life into perspective. When you see people who really have nothing, you learn to be grateful for everything you have.”

For further information about the trip, please visit www.vivapalestina.org